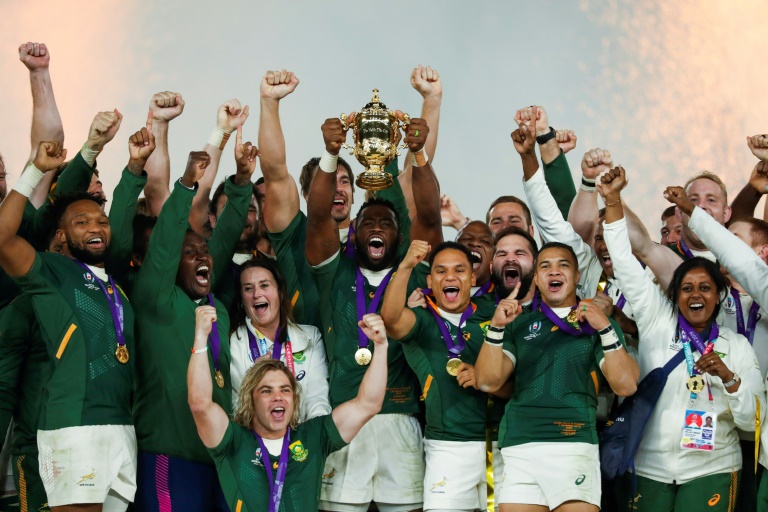 A breakthrough performance from the hosts, a huge typhoon and a dressing-down for referees: the first Rugby World Cup in Asia was not short of talking points.

AFP Sport looks back at some of the highlights of Japan 2019.

One of the great unknowns about Japan 2019 was how the host team would perform, a vital element at any major event.

The omens were not good when they suffered a 41-7 drubbing at the hands of the Springboks in a warm-up match that showed they were still some way off rugby's elite nations.

But after a nervous start, they put Russia to the sword 30-10 and then lit up the tournament with an incredible 19-12 upset of Ireland, roared on by a passionate and partisan crowd.

A stylish win over Scotland saw them top their pool, an unbelievable achievement for the Brave Blossoms, who have been on the wrong end of some historic thrashings at previous World Cups.

Japan fell short in the quarter-finals against the Springboks, who squeezed the life out of them with a gargantuan defensive effort, but they won some high-profile admirers along the way with their entertaining brand of attacking rugby.

World Rugby boss Bill Beaumont said they had shown how the game should be played, and should now be viewed as one of the sport's Tier One countries.

Contingency planning was a major talking point ahead of the tournament in Japan, one of the world's most seismically active countries which is also battered by around 20 typhoons a year.

And the worst fears were realized as Typhoon Hagibis bore down on the country -- one of the biggest and most powerful storms Japan has seen in many years, that would eventually kill more than 80 people.

The sheer size of the storm -- it covered the vast majority of the sprawling Japanese archipelago -- and the ferocity of its winds left the organisers with little choice but to cancel three pool matches, recording them as 0-0 draws.

The typhoon deprived retiring Italian legend Sergio Parisse of a final Test match against the All Blacks. The city of Kamaishi in northern Japan practically wiped off the map in the 2011 tsunami, also saw a match canceled.

The storm made a direct hit on Tokyo on October 12 but volunteers and tournament staff worked through the night to put on the crunch Japan-Scotland match in Yokohama the next day -- which the Brave Blossoms won to lift the typhoon-hit nation.

The opening skirmishes of the tournament saw an unusual number of refereeing errors, especially around the new high-tackle protocol, that sparked a very rare rebuke from World Rugby.

However, South African referee Jaco Peyper caused further embarrassment when he was pictured with some beer-swilling Welsh fans pretending to elbow them in the face.

The images, which went viral on social media, sparked outrage in France, as Peyper had just hours earlier sent off lock Sebastien Vahaamahina for a blatant elbow that changed the course of their quarter-final and sent Les Bleus home.

Peyper earned a dressing-down from the authorities and was dropped from the panel for the semi-finals.

World Rugby took the tournament to Japan to find new fans in Asia but no one could be sure of the reception in the soccer and baseball-mad Japan country.

They need not have worried as fans embraced the tournament more than even the most optimistic of organisers could have hoped.

Fans packed out the stadiums -- even a dreary Italy-Namibia match in the pouring rain was played to full stands, as the Japanese "adopted" other teams, complete with replica shirts and singing the anthems.

Brave Blossoms jerseys flew off the shelves and Japan games broke TV audience records as supporters also flocked to fanzones across the country.

The players responded, with many teams performing a very Japanese bow to all four corners of the stadium, sending the crowd into raptures.