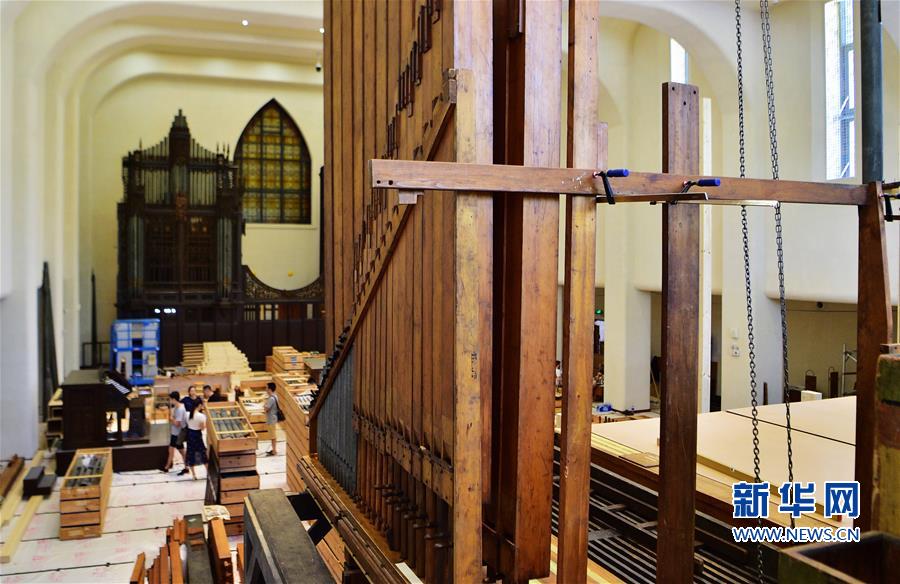 Photo taken on August 7, 2017, showing the Casavant Opus 700 pipe organ is currently under restoration, and the project will be completed wihtin this year. Photo: Xinhua

With her fingers dancing along a four-tier keyboard and her head swaying with the rhythm, Fang Site sits in front of a four-storey high pipe organ, the audience watching her in awe.

The instrument is the largest pipe organ in the Chinese mainland. It is currently being restored but Fang, 34, played it for guests at BRICS Summit held in September in Xiamen, east China's Fujian Province.

Now that the restoration is nearly complete, Fang will share stories about both the well-known organ and her hometown with musicians from all over the world.

"The organ is very famous in the United States," said Justin Berg, an American organist. "Many well-known organists have played with it or have listened to music played on it."

Berg first saw the organ when it was at the Emmanuel Church in Boston, which still holds many famous concerts.

In 2007, Hu Youyi, an Australian-Chinese pianist, bought the organ from the church and donated it to his ancestral home, the island of Gulangyu in Xiamen, where a museum was specifically built to house the instrument.

The organ was dismantled and packed into five containers which took around three weeks to travel from Boston to Xiamen.

Next month, Fang, curator of the museum, will host an event to celebrate the 100th anniversary of the organ, inviting musicians from all over the world to Gulangyu.

"Guests will not only experience the music of the majestic organ, but also the local musical culture," Fang said.

Gulangyu was listed as a UNESCO world cultural heritage site in July this year, due to its varied architecture and multi-cultural history. It is also famed as an "Island of Music" as it is the hometown of many accomplished Chinese musicians.

"Music has always been part of Gulangyu's history," said Fang. "That has inspired many older generations of musicians, like Hu, to play their part."

Hu, who died in 2013, spent most of his money collecting pianos and organs, which he ultimately donated to Gulangyu to set up China's first piano and organ museums.

"An older overseas Chinese brought the precious organ here, now we, the younger generation, are obligated to share its story with the world," said Fang.

Organs are less commonly seen in China than in the United States, but Fang said she considers it a good way to improve mutual understanding.

Berg visited Gulangyu in September, on Fang's invitation. "Seeing the Casavant in Gulangyu was like seeing an old friend," he said.

To further promote cultural exchange, Fang plans to invite organists from Boston to share stories about the Casavant, and wants to adapt the story of Hu purchasing the organ into a musical.

"Chinese and American cultures are very different," said Berg. "But we can always create new room for communication and understanding."