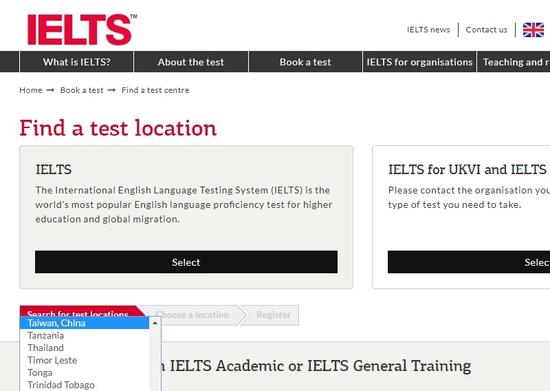 The International English Language Testing System (IELTS), one of the most widely accepted English language tests around the world, on Friday changed its reference to Taiwan on its website to reflect China's sovereignty over the island.

Taiwan was listed under the country list on IELTS' website without any reference to indicate China's sovereignty, but it has been changed into "Taiwan, China" as of Friday.
Some Taiwan politicians criticized the move, who complained to the IELTS and urged the platform to make a change, but the request was pushed back by the UK government, which maintained that private companies has the right to decide such matters on its own, media reports in Taiwan said.
IELTS' change followed a slew of foreign companies, including airlines and hotel chains, that have changed their reference to Taiwan on their website to reflect China's sovereignty. The US-based Test of English as Foreign Language, another widely attended English language test, also changed its reference to Taiwan in August.
The Chinese government has long maintained that Taiwan is an integral part of China and that foreign companies operating in China must respect and follow its laws and regulations.