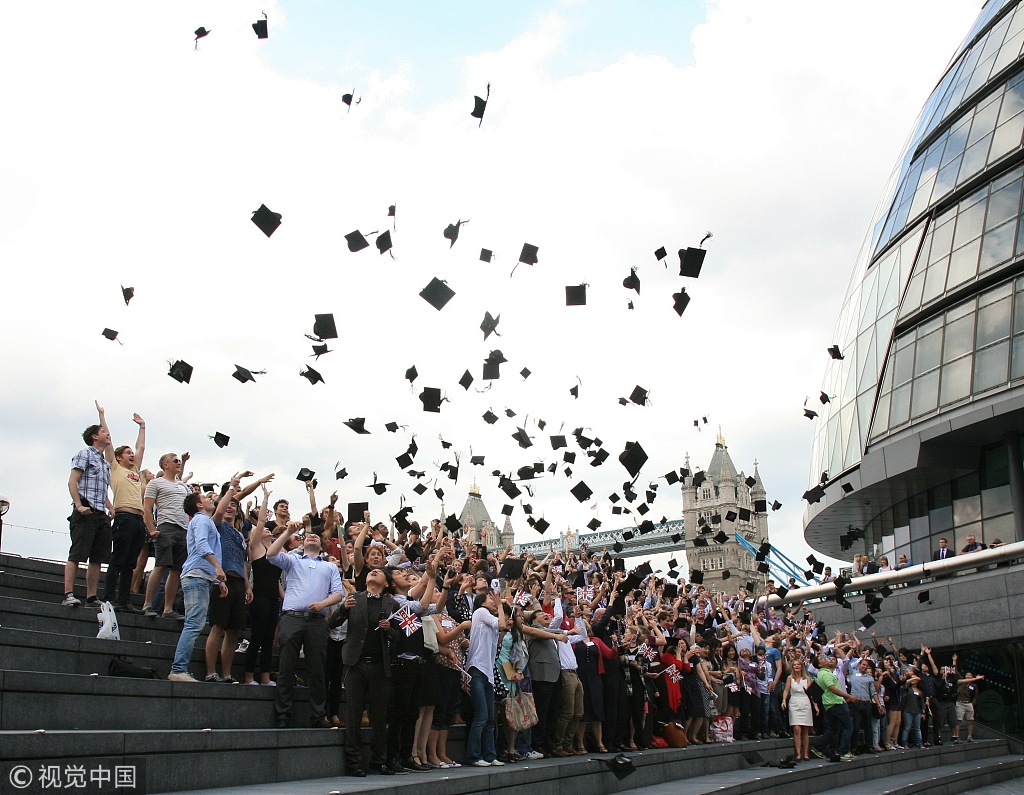 The opportunity to work in a host country after completing their studies is an important factor for many international students when considering where to enroll and the United Kingdom government hopes to tap into the sentiment with changes to its immigration rules.

The government's recently published Immigration White Paper outlines proposed changes to student visa rules that would allow bachelor degree and master's degree students to stay in the country for six months after their studies end, so they can look for work. PhD students will be able to remain for 12 months.

Previously, 36.3 percent of international students highlighted the poor situation around post-study work prospects in the UK as a reason for not studying in the country, according to Universities UK.

Despite the intention behind the proposed changes, which, if passed, would come into effect by 2021, they have not been well received, with critics saying the extra two or three months is simply not enough.

"This proposed extension will not help to attract bright, talented and qualified students to contribute, whether they are coming from China or elsewhere in the world," said Russ Shaw, founder of Tech London Advocates, a private-sector-led coalition of 6,000 experts that champions London's potential as a world-class technology hub.

Shaw said: "The right approach is to give international students who want to stay in the UK a longer period of time to remain, as some of these students will set up businesses and potentially build trade relationships back to their home markets."

Jessica Cole, head of policy at Russell Group, which represents Britain's top 24 research-intensive universities, agreed, saying the proposed changes were "a step in the right direction", but that "lengthening the period further would help the UK keep up with our international competitors, such as Canada and Australia".

Chen Wenjia, marketing manager at immigration consultancy Counton Global Mobility Solutions, said: "In terms of perceptions, we deem that the additional time at the end of the course contributes to students feeling welcome in the UK and led students to report being more likely to recommend the UK as a place to study."

China now is the largest source country for non-EU students in the UK. According to the Higher Education Statistics Agency, in 2017/18, one-third of all non-EU higher education students were from China, a total of 106,530 students. The population of learners from China in 2017/2018 was 21 percent higher than it was in 2013/14.

Chinese people studying in the UK say the proposed changes to the Immigration White Paper is unlikely to make a fundamental difference to prospective students.

Song Shanshan, a 23-year-old studying for an MA in film, television and creative practice at the University of East Anglia, said the policy falls short.

"Before the proposed changes, Chinese students who come to study for a master's degree are usually given a three- to four-month additional period on their visa after they complete their studies," she said. "The extra two months is too short, and, in reality, students' finding work within this two-month period is very slim."

Song said she chose to study in the UK because of the international reputation of its qualifications and the shorter time it takes to complete a master's degree in comparison to the United States and Australia. She said, if work prospects were her main motivation, she would have chosen a country that offered work visas or a longer post-graduation period.

The sentiment of the Chinese students does not surprise Shaw.

"By not addressing this issue comprehensively and understanding the value of international students to the wider economy, the wrong message is being conveyed," he said.

Some critics contend the UK's impending departure from the European Union has played a role in the formulation of the policy. During the coming two years, Britain is set to receive 1.3 billion euros ($1.49 billion) in education funding from the European Research Council, and other related programs.

University leaders are concerned that, if Britain leaves the EU as scheduled on March 29, this funding will be cut off, which means some universities will be forced to recruit a higher proportion of students from foreign nations, including China, to compensate for the loss in funds.

Glasgow University, University College London, and Buckingham University have all warned they may be forced to make up for a lack in funding by recruiting increasing numbers of non-EU international students, whose tuition fees are often up to three or four times as much as those of British and European students.

Shaw argues that this is the wrong approach and that international students should not be viewed as a secondary option to those whose entry will now be more restricted.

"Britain must be open to all students, and the ideas, innovation, and international connections they bring, rather than viewing them as a source of replacement funding," he said. "Britain needs a fit-for-purpose immigration system that allows for a pipeline of talent to enter the country, and support industries in desperate need of talent — like the tech sector. International students are a vital talent pool for the nation."