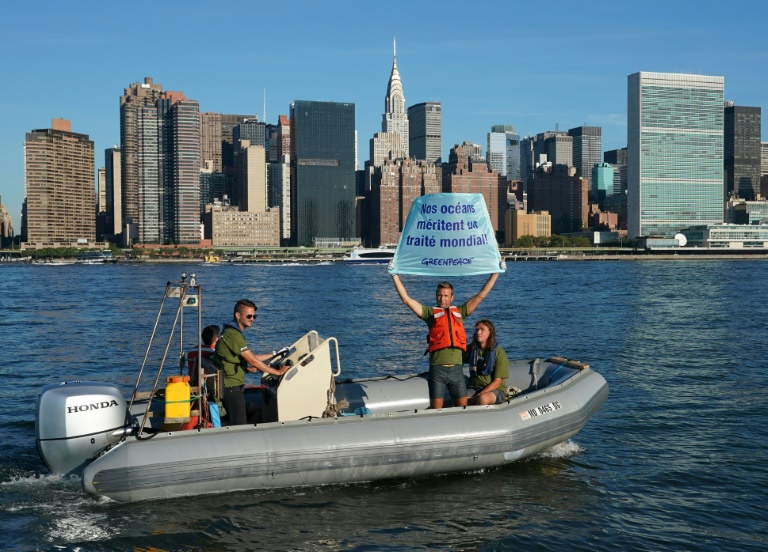 A key question facing UN member states is whether and how to share highly prized marine genetic resources. (Photo: AFP)

UN member states on Tuesday kicked off two years of negotiations toward a treaty that would finally regulate the high seas, which contain vast troves of valuable plant and animal DNA.

In the morning, two small boats in the East River operated by Greenpeace hoisted banners that read: "Global Oceans - Global Treaty!" and "Our oceans deserve a global treaty."

"It is urgent they create a strong ocean treaty which allows us to create a global network of ocean sanctuaries," said Sandra Schoettner, a marine biologist with Greenpeace.

The talks are set to unfold over the next two years in four separate sessions, each lasting two weeks.

The key question is how to regulate areas of the high seas, defined as waters beyond national jurisdiction, beginning about 12 nautical miles (22 kilometers) from the coast.

The high seas cover about 46 percent of the planet's surface.

The treaty is likely to allow for marine protected areas, and will aim to improve environmental research.

A key question is whether and how to share highly prized marine genetic resources, namely plant and animal DNA that companies patent in the hunt for everything from better cosmetics to improved crop yields.

The world market for marine biotechnology is expected to reach $6.4 billion by 2025.

In 1982, the UN adopted the Convention on the Law of the Sea, but left the high seas free from restrictions.

Since then, shipping routes have expanded considerably, and fishing and mining the resources of the ocean deep have aroused increasing global interest.