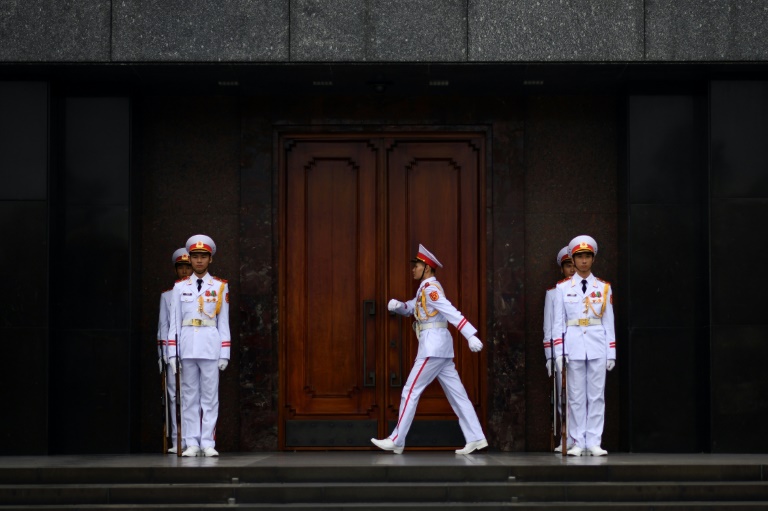 The guards are chosen for their physical stamina, communist party dedication, and easy-on-the-eyes appearance (Photo: AFP)

The task of safeguarding the embalmed corpse of Vietnam's revolutionary leader Ho Chi Minh is gruelling: carefully-selected riflemen work around the clock, watching over the communist nation's founding father who died 50 years ago Monday.

Protecting him is the ultimate patriotic service for men in stiff white uniforms at Ho's towering tomb in Hanoi, a monolithic shrine to a man who still pervades public life despite his fading relevance among the youth.

The job is a "dream come true" for guard Nguyen Xuan Thang, even if it's not always easy.

"We have to have our eyes on everything to deal with any situation that may arise," the 41-year-old lieutenant colonel told AFP.

All year round, he works up to four two-hour shifts every day -- often outside the tomb in the blistering summer heat, monsoon rains, or frigid winter weather.

Some days he works inside the cool, dark chambers where Ho's waxy body -- his wispy goatee beard still intact -- is on display for daily pilgrimages by thousands of schoolchildren, tourists and war veterans who come to pay their respects.

Even after hours, Ho is never alone: soldiers flank his encased body 24 hours a day.

"For us who see him every day the emotion is still overwhelming," said Thang, who like the rest of his team was hired because of his physical stamina, communist party dedication, and easy-on-the-eyes appearance.

Guards like Thang aren't the only ones tasked with looking after Uncle Ho, as he is affectionately known in the country.

A team of four Russian and seven Vietnamese scientists were hired this year to evaluate his embalmed corpse ahead of the 50th anniversary on September 2.

"The body of president Ho Chi Minh has been kept in very good shape," said Major General Cao Dinh Kiem, a senior member of the team in charge of guarding the mausoleum, which opened in 1975.

Bring in the Russians

Rumours abound in Vietnam that the body might not really be Ho, or that he is sent to Russia every year for maintenance, which Kiem dismissed with a smile.

"In short, that is not correct," he said.

Ahead of Ho's death in 1969 -- and behind his back -- his aides turned to allies in the Soviet Union to ask how they preserved their own communist founding father, Vladimir Lenin, who is still entombed in Moscow's Red Square.

Vietnam struck up a deal with the USSR to receive embalming materials and guidance from their experts.

The deal died after the collapse of the Soviet Union in 1991, and Hanoi scrambled to replace it with a commercial arrangement for the exchanges, which remains in place today.

Considered state secrets, the details of that arrangement cannot be publicly shared, not even with communist allies North Korea or China, which have both preserved former leaders for posterity.

"In terms of (sharing) the pharmaceutical techniques, it's an absolute no," said Kiem.

Ho did not live long enough to see the end of the bloody war against the US-backed south in 1975, when North Vietnamese tanks rolled through the former southern capital Saigon, later renamed Ho Chi Minh City.

But Ho did deliver clear burial plans in his will: a request to be cremated and have his ashes modestly displayed in north, central and south Vietnam in a sign of symbolic unity.

"There should be no stone stele or bronze statue", but rather a small ceramic urn on three tree-lined hills for visitors, he wrote his will.

However, eager to capitalise on the popularity of the north's communist leader, his aides chose instead to build a grand tomb, drawing inspiration from Lenin's mausoleum, the pyramids in Egypt and the Washington Monument.

The powerful symbol of Ho Chi Minh continues to be commandeered today by Vietnam's communist leaders; his teachings are invoked in school curricula, political and military training, children's books, patriotic songs and on propaganda billboards.

"The Communist party needs Ho and uses Ho whenever and wherever it can... there is a Ho for everyone -- children, mothers, cadres, bureaucrats, and soldiers," said Christopher Goscha, author of "Vietnam: A New History".

But for Vietnam's booming young population -- around half the country is under 30 -- Ho figures as a distant historic character, far removed from the thriving capitalism, ubiquitous social media and yearning for freedom that preoccupies most of the smartphone-obsessed youth today.

"Ho has stiff competition and it's only getting more difficult to make him relevant to this younger generation," Goscha told AFP.

But for Ho's dutiful minders, the communist leader remains a central focus.

Thang and his team busily prepared for an official wreath-laying ceremony for Ho held Friday, and expects visitor numbers to surge on Monday for the death anniversary, which also happens to be National Day.

"We have prepared our soldiers spiritually and physically to best serve visitors... and pay respects to the president," Thang said.