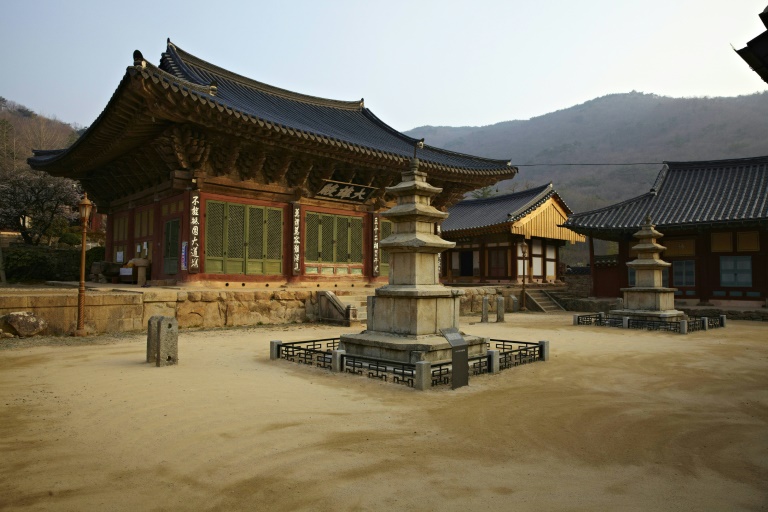 The Seonamsa temple in South Jeolla province is one of seven ancient South Korean temples to be listed by UNESCO (Photo: AFP)

Seven ancient Korean mountain temples, which typify the way Buddhism in the country has merged with indigenous beliefs and styles, were listed as UNESCO World Heritage sites on Saturday.

The seven mountain temples -- Seonamsa, Daeheungsa, Beopjusa, Magoksa, Tongdosa, Bongjeongsa, Buseoksa -- were all established during the Three Kingdoms period that lasted until the 7th century AD.

UNESCO made the announcement at a meeting in the Bahraini capital Manama.

"These mountain monasteries are sacred places, which have survived as living centres of faith and daily religious practice to the present," UNESCO said in a press statement.

Buddhism was imported to the Korean peninsula in the fourth century and accepted by the ancient kingdoms of Goguryeo, Baekje and Silla, establishing it as the national religion for more than 1,000 years.

During the religion's heyday in the fifth and sixth centuries many houses of worship were built under strong state patronage, accelerating the importation of Buddhist culture, architecture and style.

Buildings were constructed in supposedly auspicious locations and many temples set up in hilly areas, in line with the traditional Korean reverence for mountains and the Zen focus on meditation in a calm environment.

Temples were built on high positions protected by hills and commanding an open view over other mountains.

A typical mountain temple has a long winding entrance path up the slope, buildings laid out in a square with an inner courtyard in the middle.

The most important hall is on the highest level at the back, and halls for meditation, everyday living areas for monks, and a pavilion form the other three sides.

But Buddhism's influence began to wane after the Chosun dynasty, which took over in the 14th century, adopted Confucianism as its ideology and launched an extensive and enduring crackdown on the religion.

It forced many urban temples to close, leaving only those in remote hills to survive.