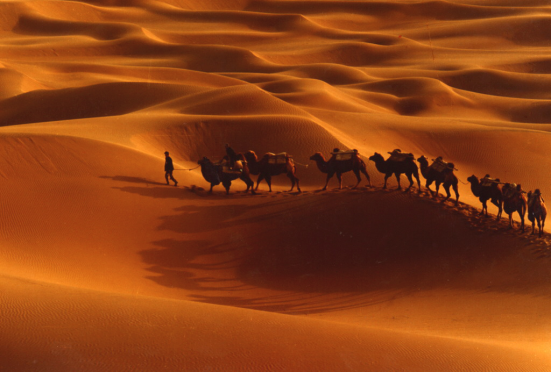 A group of camels walk by in the Taklimakan desert. (Photo: China Daily)

The Silk Roads is the routes network of Chang' an-Tianshan Corridor inscribed on the World Heritage List since 2014.

"The Silk Roads encompass some of the most complex and fascinating systems in the history of world civilizations," noted the UNESCO World Heritage Center.

"It enabled the exchange of cargo such as silk, spices, gems, furs, but also shared art, religion, and technology," it added.

"It is also one of the first cultural 'corridors' to be inscribed on the World Heritage List," the center noted, adding that it embodies "the principles of cultural diversity, heritage, and peaceful cooperation."

World Heritage is the official UNESCO publication from the World Heritage Centre featuring in-depth articles on cultural and natural World Heritage sites. The quarterly review is produced in English, French, and Spanish.

China has 22 of the Silk Road's 33 UNESCO heritage sites. The rest eight are in Kazakhstan and three in Kyrgyzstan. They range from palaces and pagoda sites in cities to ruins in remote, inaccessible deserts.

The route, which starts in Xi'an, in northwest China's Shaanxi Province, was once the main corridor for trade and cultural exchange between Asia and Europe.