CULTURE Unforbid the Forbidden City: the rejuvenation of Chinese culture

Unforbid the Forbidden City: the rejuvenation of Chinese culture

Criss-crossed with enchanting alleyways, an ancient Chinese city teems with hustle and bustle. Emerald willows ripple in the vernal breeze; bamboo-topped fishing boats ply the sapphire canals. Along the riverbank, the clunk of bells heralds the arrival of foreign caravans, under the glowing sunlight, languorous ladies guard their magnolia-white skin with silk veils.

Though such images evoke a sense of breathtaking antiquity, it’s not time travel, but a combo of ancient art and modern technologies. Displayed on an off-the-scale sized screen in China’s Palace Museum, the digital version of “Along the River During the Qingming Festival”, an ancient painting known as “China’s Mona Lisa,” has attracted countless visitors worldwide.

For technical reasons, the priceless piece of art, which includes 814 humans and 60 animals, is seldom exhibited in public. In 2015, when the original painting made its debut in the Palace Museum, ebullient visitors stood in line for seven hours just for a glimpse of its beauty.

“It’s really a pity that I never have the chance to see the original painting, but the exhibition has definitely made up for my regrets. Its vivid pattern of manifestation can also help kids understand abstract cultural content,” said Lu Zhiming, a 36-year-old Beijing citizen, who brought his 8-year-old son to see the exhibition.

In addition to the digital mural, a 4D movie can also help viewers understand the cultural connotation of the painting. Dubbed with traditional music, the movie thoroughly demonstrates the daily life of people and the landscape of the capital, Bianjing during the Northern Song Dynasty, with moving characters portraying the scene in a five-minute circle.

This is not the first time that China has innovatively promoted its traditional culture. In 2017, People’s Daily and local governments along the ancient Silk Road jointly published a cultural manifesto, aiming to protect the country’s historical heritage, as well as reinvigorating traditional culture.

“As a country that has splendid culture and a long history, China has much to offer to the world. More artworks of high quality are needed to foster the nation’s cultural confidence, while innovative ways should be found to demonstrate the essence of traditional Chinese culture,” said Ai Xin, an art research fellow at Peking University. 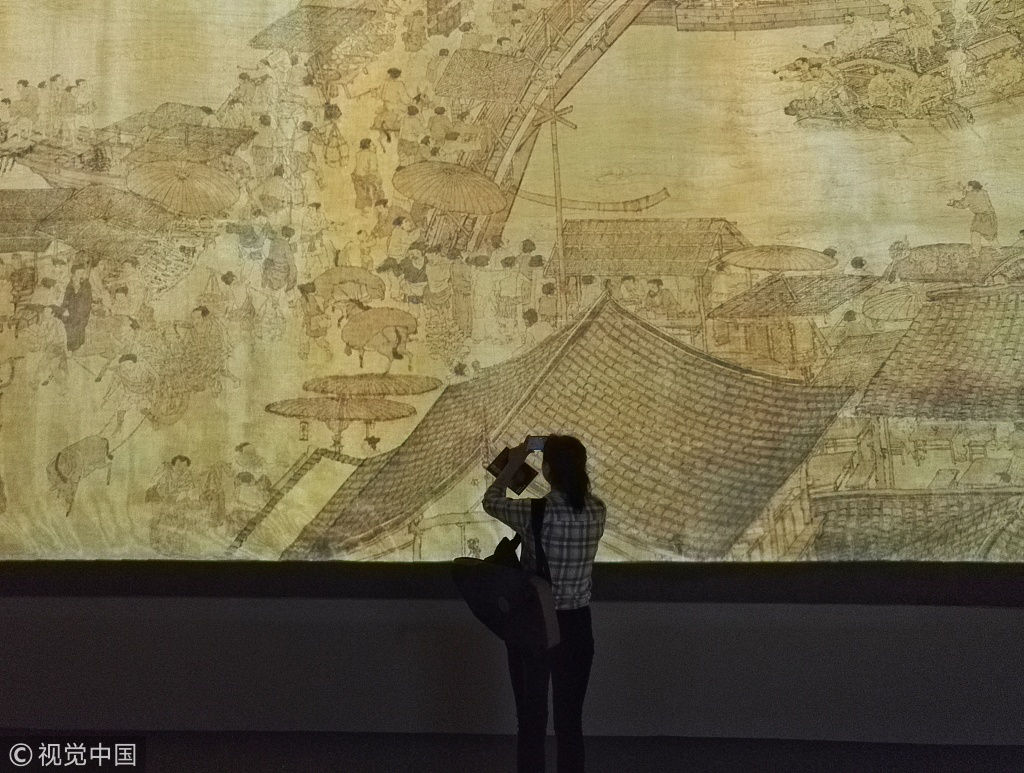 A visitor takes pictures of the digital show. (Photo:VCG)

As China continues to make economic and social progress, both the government and scholars have been making an effort to breathe new life into traditional culture. During his visit to UNESCO headquarters in 2014, Chinese President Xi Jinping reiterated that the country will “encourage creative shifts and innovative development of the Chinese civilization in keeping with the progress of the times.”

The Palace Museum appears to be a leading power in cultural innovation. From inking imperial edicts on T-shirts to creating miniatures of the royal residence, the museum has caused a cultural frenzy nationwide. According to Beijing Times, the museum designed over 9170 cultural souvenirs as of 2016, earning about one billion RMB in the same year.

The museum has also resorted to advanced technologies to raise the public’s cultural awareness and identity. Dozens of computer games have been developed to help users learn about Chinese literature, art, customs and cuisine, while viewer-interactive mobile apps have successfully aroused people’s interest to explore the country’s historical myths.

“With the help of advanced technologies and creativity, the aesthetic value of cultural relics can be well-preserved, while viewers can have a better understanding of our national treasure and culture,” Shan Jixiang, director of the Place Museum, told Xinhua.

According to Shan, educating the younger generation is crucial for China’s cultural development. The museum has spent much of its income on developing art courses for students, while over 25,000 free lectures and interactive activities were held in 2017 to help kids understand Chinese culture.

“By invigorating traditional culture with modern means, more access has been provided for our children to understand great Chinese heritage. We believe that a new generation with great love for Chinese culture is emerging,” said Shan.