With the Mid-Autumn Festival right around the corner, sales of mooncakes, the festival's most important symbol and dessert, are on the rise. 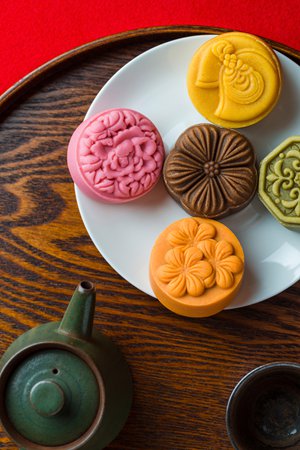 The Mid-Autumn Festival, which falls on September 24 this year, is one of the most important occasions of the year for Chinese. On this national holiday, people usually eat mooncakes while appreciating the beauty of the full moon with their family.According to a recent report about mooncake industry trends this year, excessive packaging and sky-high prices have been gradually phased out to focus on high quality products that are also affordable. Previously, a box of mooncakes could often cost more than 1,000 yuan ($15). In the past, fillings for mooncakes were limited to traditional ingredients such as lotus or bean paste and they tended to be oily. However, as consumers began seeking out new and healthier fillings, mooncakes have evolved to feature various kinds of modern flavors with more of an emphasis on a healthy diet.To beat out the competition, merchants try their best every year to meet consumer demands and even introduce some "unique" mooncakes that people have never heard of before. Mooncakes have also spurred hot debate on Sina Weibo, with the hashtag "mooncake" getting more than 120 million views as netizens spend hours posting about the different types of "unique" mooncakes they have eaten. Let's look at some of these "unique" mooncakes below.Pu'er and chrysanthemums When it comes to Pu'er and chrysanthemums, the first thing that comes to most Chinese people's minds is tea. However, some mooncake innovators have decided to use these ingredients as a filling for the traditional dessert. "It tastes good by itself, and even better with a cup of tea," commented one netizen on Sina Weibo. Rose petalsRoses are usually used to express one's love for a romantic partner. Well, around the Mid-Autumn Festival why not express your love with a mooncake made from rose petals? This type of mooncake leaves a lingering flavor in one's mouth.Jasmine teaJasmine has a very light and pleasant scent, so when jasmine tea leaves are used as fillings for a mooncake, the taste is light as well. For people who do not like snacks that are too sweet or greasy, Jasmine mooncakes are a very satisfying treat. Grapefruit and lemons Citrus fruits such as grapefruit and lemons are common in baking, mainly for adding some fragrance to whatever you are making. When these ingredients are used in mooncakes, chefs must tread carefully when it comes to quantity or else the end product may taste too sour. DurianThe smell of durian is certainly unique, if a bit smelly. If you love durian, you will definitely love this type of mooncake. However, for people who can't handle the strong odor, this mooncake may not be for you. Views on this type of mooncake are so polarized that some even list it among the top five worst mooncakes.CrayfishWhen it comes to making crayfish mooncakes, the quality and freshness of your ingredients are important as seafood can go bad very easily. Netizens in China are very divided on this type of mooncake. While some are more than happy to try some seafood flavored cakes, others find it too fishy and too much of a departure from tradition. Sausages Mooncakes with sausage as fillings are rapidly becoming very popular in China among meat lovers. These mooncakes tend to be fairly salty. They are usually combined with nut fillings to make them taste better. One netizen said: "As a person who likes sausage, I can't resist this type of mooncake."CheeseCheesecake lovers are sure to adore this variety of mooncake! Instead of lotus paste, cheesecake mooncakes are filled with cream cheese and often contain a center of fruity jam or preserves for a punch of flavor.Liquor For consumers that are looking for a dessert that offers more than just great tasting flavor, mooncakes made from wine may be perfect for you. This year has seen mooncakes made from red wine and the National Palace Museum in Beijing has even introduced a mooncake made using Moutai, known as the "National Liquor" of China. Ice creamHäagen-Dazs, the well-known ice cream brand, has been killing it with the ice cream mooncake game since 1997 when the delicious frozen treats were first introduced. These cakes trade traditional warm fillings of meat or lotus paste for a cool center of ice cream. Popular flavors include cookies and cream and strawberry. There is even a version that features a dollop of lemon sorbet in the middle to resemble traditional egg yolk filling mooncakes.