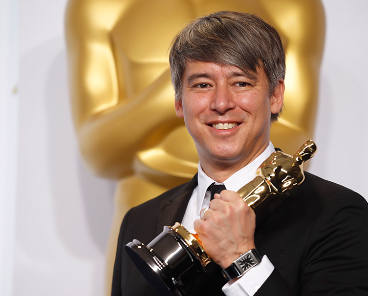 Tom Cross poses with the Oscar for best film editing for "Whiplash" during the 87th Academy Awards in Hollywood, California, Feb. 22, 2015. (Photo: Xinhua)

"I went to China to connect with fine filmmakers that I wouldn't have a chance to meet otherwise - who share my passion for great filmmaking," Academy Award-winning editor Tom Cross told Xinhua in a recent interview about his visit to China.

"It turned out to be the opportunity of a lifetime," said the editor of such iconic, hit movies of "Whiplash", "La La Land", "Hostiles", "The Greatest Showman" and "First Man", with his signature grin.

Cross recently returned from his first trip to China where he received a standing ovation after teaching a three-day masterclass on advanced editing to 100 of China's top film students and professionals in Beijing.

"I was overwhelmed by the interest Chinese students have in movies and how talented and eager they were. I look forward to working with fine Chinese filmmakers," Cross said.

Many students said that Cross was amazing and shared invaluable new techniques with them.

Cross's masterclass is one of many being teed up by Beijing-based New Studios Media Group, in partnership with Hollywood-based Pierrepont Productions.

"Hollywood does superior film production and has a lot of famous and successful filmmakers," Chen Yue, co-founder and VP of New Studios, told Xinhua. "It made sense to reach out to Hollywood to bring exceptional teachers to China so we could elevate Chinese production techniques."

New Studios Media Group was started in 2012 by four friends who conceived of a subscription-based website where Chinese filmmakers could go to find skilled crew and share their creative work with their peers. It ended up attracting investor heavy-weights Alibaba, Perfect World, Sequoia Capital and so on, which allowed New Studios to start funding some member projects.

Their productions alerted them to other film community needs. "We saw the need for better-trained and more experienced crews in China," said Dou Hewai, general manager of New Studio Academy (NSA), which is a branch of New Studios Media Group.

Pierrepont Productions' educational division brings A-list Hollywood talent to China to teach the tricks of the trade that have enabled Hollywood to lead the entertainment industry for the last 100 years.

"We partnered up with New Studios because they were committed to producing a pipeline of great masterclasses with us that would set a very high standard for professional training in China," Founder and CEO JJ Pierrepont told Xinhua.

Shang Jin, head of Marketing & Content of NSA, told Xinhua, "These classes provide the opportunity for Chinese filmmakers to perfect their craft and improve career opportunities in China and in Hollywood."

"Editing is such a vital part of making a successful film and it's something the Chinese want to master," said Chen.

"We've set the template now. We know what people want to learn and how they want to learn it," affirmed Tong Yinglong, NSA's business development manager.

"China's such a big, complicated place, so it was great to find my client in such good hands with this producing team," said the Hollywood agent of Cross, Devin Mann, of Iconic Agency. "I'll definitely recommend it to my other clients and colleagues in Hollywood."

Education is big business. Some enterprising Chinese companies, like Netease, are bringing Chinese students of all ages to Hollywood during the summer holidays for immersive training workshops.

Before leaving China, Cross also lectured at the Beijing Film Academy to a group of 650 students and filmmakers.

"It was an honor to welcome an editor of Tom Cross's stature to the Beijing Film Academy," Zhou Xinxia, chairperson of the China Film Editors Society, told Xinhua.

"We hope it will be the first of many such exchanges to enable Chinese and US filmmakers to learn from each other," she added.

Cross closed with a heartfelt wish, "Through movies, we can share a journey of discovery that illuminates our collective human experiences, as we laugh, we cry, and learn about ourselves and others ... Why not do that together?"