US exhibition unveils lives of empresses

A new show about the women of Chinese royal courts at a museum in the United States highlights the growing cultural ties between the two countries.

The portrait of Empress Xiaoxian in 1777. (Photo: Peabody Essex Museum)

The women of the Chinese imperial court were a special group of people throughout the country's long history. As the wives of the most esteemed rulers of the land, it is easy to imagine how magnificent their lives once were, given their social standing. Yet since written records and documents focus more on the rulers, who were male, the details of the royal women's lives largely remain a mystery.

To shed some light on these untold stories of the queens, an exhibition at the Peabody Essex Museum in Salem, Massachusetts, United States, opened recently. Titled Empresses of China's Forbidden City, the exhibition features hundreds of spectacular objects from the Chinese court over the centuries.

"This is the first major exhibition that explores the role of the empresses in China's last dynasty, the Qing Dynasty from 1644 to 1911. In many respects, it's quite surprising that this topic hasn't been tackled before," says Lynda Roscoe Hartigan, the James B. and Mary Lou Hawkes deputy director of the PEM, during a recent media preview of the exhibition. 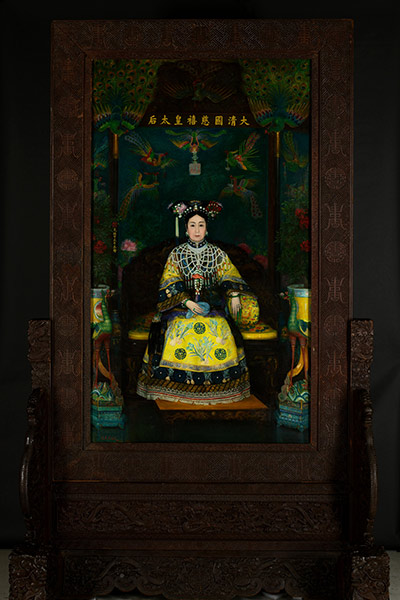 The exhibition, which opened to the public on Saturday, features more than 200 works including imperial portraits, jewelry, garments, Buddhist sculptures and decorative art objects from the Palace Museum in Beijing and the Smithsonian Institution in Washington, many of which have never been publicly displayed before.

The result of more than four years of collaborative effort between experts from China and the US, the exhibition highlights the growing cultural dialogue between the two countries.

"This exhibition, I think quite fittingly and quite frankly deliberately on the part of the two institutions, coincides with the 40th anniversary of US-China diplomatic relations," says Hartigan.

And this legacy of cultural diplomacy is highlighted in some of the pieces on display at the exhibition.

One star work being showcased is a 5-meter-tall oil painting of the Empress Dowager Cixi, painted in 1903 by American artist Katharine Carl - the first ever female court painter in China.

The painting was later sent to the US to be exhibited at the 1904 St. Louis World's Fair, and was presented as a gift to US President Theodore Roosevelt the following year.

"It embodies the fact that the two countries have had a long partnership and have found many ways of working together. And we think this painting shows some of that feeling," says Jan Stuart, the co-curator of the exhibition and the Melvin R. Seiden curator of Chinese art at the Smithsonian's Freer and Arthur M. Sackler galleries. 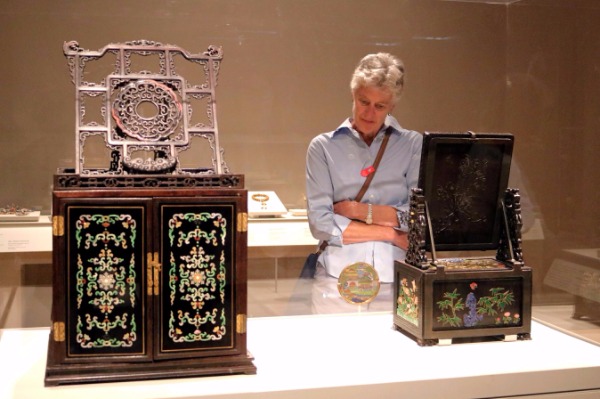 A dressing case with a mirror crafted during Emperor Qianlong's time attracts a visitor at an ongoing exhibition titled Empresses of China's Forbidden City, at the US Peabody Essex Museum in Salem, Massachusetts. (Photo by Judy Zhu for China Daily)

The exhibition also comes at a time when the role of women in society has become a hot topic.

"It's very timely that we can look at the Forbidden City from a fresh perspective - that is, from a woman's perspective," says Daisy Yiyou Wang, the other co-curator and PEM's Robert N. Shapiro curator of Chinese and East Asian art.

"This exhibition is thrilling in that it opens a silent yet colorful book about how these women helped shape the course of history," she adds.

"One of the themes for our exhibition is for people to understand that women in this last dynasty found ways to show off their personal tastes and spiritual lives," says Stuart, noting that some of the empresses like Cixi, even found ways to carve out a path to further their political ambitions.

Lucas Dileo, a Boston resident who is a regular visitor to China, says this is the first time he has seen an exhibition about Chinese empresses in the US.

"Often exhibitions about Chinese history and the arts show more of the permanent aspects like bronze, different types of bowls, some fabrics or scrolls. The chance to tell the story of people's lives who made an imprint on history makes this very special," he says.

"Particularly these days, as women are taking up more important roles across society, it's good to be reminded that they also played key roles in the past in major countries around the world," Dileo adds.

To better engage with American audiences, the two curators traveled to the Forbidden City in Beijing on numerous occasions. With the help of Chinese experts from the Palace Museum, they selected the most representative pieces from the vast numbers of treasures held there and went to great lengths to design immersive and interactive ways of presenting them.

"I was impressed by Empress Xiaoxian, who had a touching poem written about her by her husband. She was respected in her own right and was not regarded as a victim by her devoted husband and son," says visitor Carol Lutes.

Xiaoxian passed away at the age of 36, and her heartbroken husband Emperor Qianlong penned a poem to mourn his beloved wife. Visitors can listen to the poem in English while examining the original copy on display.

The exhibition will run at the PEM through Feb 10.