US food authors pen book about culinary adventures in China 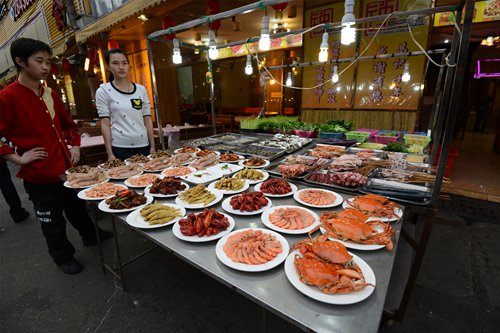 Howie Southworth and his friend Greg Matza, two bestselling food authors and devoted foodies from the US, have been eating their way through China for over two decades. Soon after their culinary journeys began, both fell in love with the country's street food.

To tell the fascinating story of their street food adventures in China, this dynamic duo wrote an entertaining cookbook called Chinese Street Food.

"It was an amazing opportunity to write a book such as this," Southworth said at a launch event for the book hosted by the Confucius Institute of George Washington University on Wednesday.

Brimming with recipes, folklore, origin stories and witty chats with the cooks, vendors and fellow gastronomes they met along the way, the book takes readers on a culinary journey outside of restaurants and into the streets of different regions of China.

"We wrote Chinese Street Food to celebrate a culinary culture that is quickly changing yet deeply rooted in tradition," Southworth said.

The book introduces readers to 100 different kinds of authentic regional street food by presenting small dishes ranging from the balmy rice paddies of Yunnan and spicy flavors of Sichuan to the frozen tundra of Harbin and the imperial majesty of Beijing.

"Our aim is to share a bit of culinary history as well as our personal relationship to the food, the vendors, the cooks and our fellow gastronomes," Southworth wrote in the book's introduction.

"The dishes throughout the book are simple, delicious and far from top-of-the-mind."

Southworth and Matza have a special place in their hearts for street food in China, as it allows them to be impulsive and appeals to the five senses.

"It just makes sense to follow our five senses rather than a restaurant guide. We're also avid cooks, so it helps that with street food, we can eat, watch, and chat with cooks on this block, the next, the next. Endless fun," Southworth said.

In his eyes, though regional specialties in China have begun to make their way to the US in recent years, street food is one important element of Chinese cuisine that remains rare throughout the Western world.

As Southworth sees it, street food is high on the entertainment factor. "A walkable nosh on the way to the office, a quick, cheap lunch, or an evening spent hopping from snack stand to snack stand with friends is an everyday occurrence in China."

"It's a more entertaining option than sitting around a table at McDonald's. It fits in because it's just yet another style of eating to try to diversify the way the Chinese folks eat," Southworth said.

Growing up in a household that was fascinated with food, Southworth's childhood memories are filled with the aroma of Sunday gravy and the amusing scene of his Italian grandmother chasing him out of the kitchen with a hot spoon.

After obtaining a graduate degree in educational administration from New York University in 1996, Southworth moved to a small town outside of China's northeastern city of Shenyang to teach English. The year-long experience ignited his lifelong passion for China, and most notably, for the cuisine.

"I moved to China to eat. I supported this most delectable habit by teaching, but in reality, teaching was a way to pass the time between meals," Southworth quipped about his experience in China.

Looking to the future

Witnessing a rapidly modernizing China as they traveled, the duo noticed the street food scene in China has also been changing over the years.

In recent years, in Beijing, the city government has been closing down a lot of street stalls in order to create a more habitable and clean environment for citizens.

Though the street food scene may be shifting, Southworth believes such a change may also allow street food to improve, as it may force traditional street food preparation to be more refined.

Southworth recounted a recent visit to Beijing during which he had a chat with Chen Xiaoqing, a film director and food author in China. The two had an in-depth conversation about Chinese street food.

As the cuisine itself is enjoying a renaissance in China, Southworth said both he and Chen hope Chinese street food will remain a part of Chinese cityscapes.

"China's society is undergoing big changes. As the migration of people around the country picks up, so does the diversity in cooking, so the future of street food is very bright," Chen said.