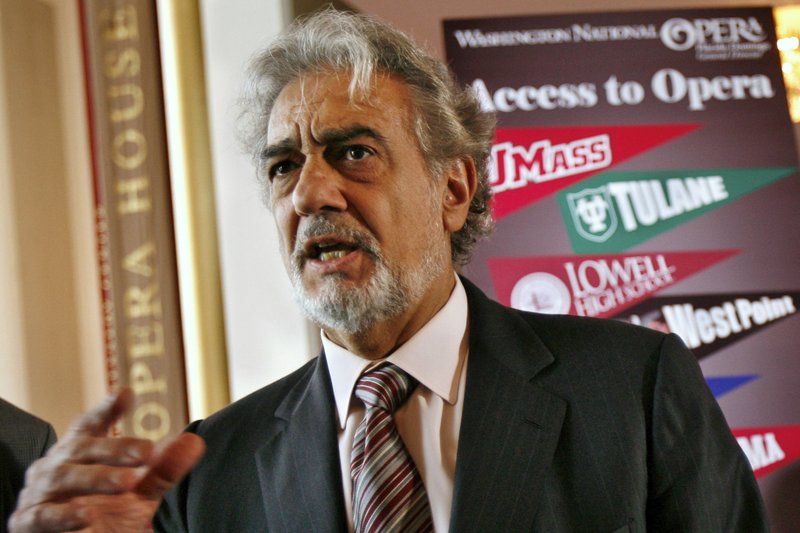 In this May 23, 2007, file photo, Placido Domingo, general director of the Washington National Opera, speaks during a news conference in Washington about a simulcast of a performance of La Boheme. (Photo: AP)

An investigation into legendary singer Plácido Domingo by the US union representing opera performers found more than two dozen people who said they were sexually harassed or witnessed inappropriate behavior by the superstar when he held senior management positions at Washington National Opera and Los Angeles Opera, according to people familiar with the findings.

The investigation, conducted by lawyers hired by the American Guild of Musical Artists, concluded that the accounts from 27 people showed a clear pattern of sexual misconduct and abuse of power by Domingo spanning at least two decades, according to those who spoke to The Associated Press on condition of anonymity because they were not authorized to disclose the findings.

In response to a request for comment from the AP, Domingo issued a statement saying: “I have taken time over the last several months to reflect on the allegations that various colleagues of mine have made against me. I respect that these women finally felt comfortable enough to speak out, and I want them to know that I am truly sorry for the hurt that I caused them. I accept full responsibility for my actions, and I have grown from this experience.”

The union’s investigation was the first of two independent inquiries launched after multiple women accused Domingo of sexual harassment and abusing his power in two AP stories published last year. The second inquiry, still ongoing, was launched by LA Opera, where Domingo had been a general director since 2003 before resigning in October.

According to the people familiar with the contents of the union’s investigation, lawyers from the firm Cozen O’Connor interviewed 55 people from September until late December. In addition to the 27 who said they experienced or witnessed sexually suggestive behavior on the part of Domingo in the 1990s and 2000s, 12 others said they were aware of the star’s reputation and that it was common knowledge at the two companies.

Mirroring AP’s reporting last year, the investigation found that the allegations included unsolicited physical touching that ranged from kisses on the mouth to groping, late-night phone calls in which Domingo asked women to come to his residence, and inviting women to go out with him socially with such persistence that some felt they were being stalked.

Two of the women told investigators that they had sexual relations with Domingo, saying they felt compelled to submit because of his position of authority and potential to damage their careers, according to the people familiar with the investigation.

In the rest of his statement to the AP, Domingo said, “I understand now that some women may have feared to express themselves honestly because of a concern that their careers would be adversely affected if they did so. While that was never my intention, no one should ever be made to feel that way.

“I am committed to affecting positive change in the opera industry so that no one else has to have that same experience. It is my fervent wish that the result will be a safer place to work for all in the opera industry, and I hope that my example moving forward will encourage others to follow.”

Union officials would not directly address the contents of the report, which has not been made public. But the union’s national executive director, Leonard Egert, issued a statement to the AP saying, “AGMA salutes the brave people across all our industries and encourages them to continue speaking out against wrongdoing. We call upon management, and pledge to work collaboratively with them, to get at the root causes that have allowed this behavior to occur, and go unaddressed, in opera, dance, and choral cultures for far too long.”

Egert, other senior union leaders and the investigators briefed the union’s Board of Governors on the findings Monday.

The people familiar with the investigation said Domingo, now 79, had reiterated his denials of wrongdoing to investigators and contended that he did not occupy a position of power over his colleagues and their careers. They said he told investigators he had engaged in flirtatious behavior but did not cross a line into inappropriate touching or behavior like asking colleagues to meet privately in his residence.

They said the investigators characterized Domingo’s conduct as inappropriate workplace behavior under the norms of the 1990s or by today’s #MeToo standards.

The investigators said that they found the witness accounts to be credible based on the number of people who came forward, the similarities of their stories, corroborations of their accounts, and the common theme that Domingo’s behavior and reputation were such widespread knowledge that women at his companies were warned to avoid being in close contact with him.

The union announced its investigation in September, shortly after the publication of AP’s stories, saying it did not trust the industry to police itself. Most of the harassment alleged in AP’s stories occurred at LA Opera and at Washington opera, which has repeatedly declined to say if it would investigate the claims. LA Opera has not said when or if it will make its findings public.

In the AP stories, more than 20 women accused Domingo of sexual harassment or other inappropriate behavior in encounters taking place from the late 1980s to the 2000s. Dozens more said his behavior was an open secret in the industry.

A number of US companies canceled Domingo appearances and he withdrew from others under pressure. But no European performances have been affected.

Domingo has been one of the opera’s most beloved and successful figures, admired as an ambassador for the art form and valued for his enduring talent and ability to attract sellout crowds in an era of diminishing ticket sales.

He also was a prolific conductor and powerful administrator, which his accusers told the AP gave him the power to make or break careers and behave with impunity. In addition to heading Los Angeles Opera, he served as general director at Washington Opera from 2003-2011.

Most of Domingo’s accusers were young and starting their careers at the time. Several told the AP that he dangled job prospects as he tried to pressure them into sexual relationships, sometimes punishing them professionally if they rebuffed him. Soprano Angela Turner Wilson said that after weeks of pursuing her, Domingo forcefully grabbed her bare breast under her robe in a backstage room.

The accusations in the union’s report included multiple new accusers not interviewed by the AP, according to the people familiar with its contents.

Investigators said most of the people they interviewed requested anonymity in the final report, fearing professional retaliation or personal embarrassment, highlighting the problem the industry faces in trying to convince victims to come forward.