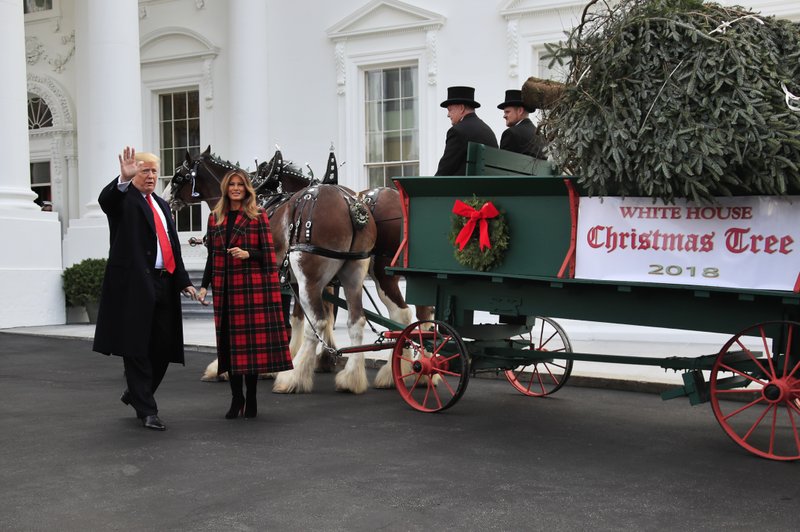 As strains of “O Christmas Tree” wafted through the cool air, US President Donald Trump and first lady Melania Trump on Monday accepted the official White House Christmas tree that will go on display in the Blue Room and anchor the holiday season at the executive mansion.

The 19½-foot (6-meter) tall Fraser fir was cut from a farm owned by Larry Smith of Newland, North Carolina, and delivered to the front door of the White House on a green wagon hitched to a pair of horses. A sign on the wagon said “White House Christmas Tree 2018.”

Holding each other’s hand, the Trumps spent about a minute walking around the wagon and inspecting the tree, with the president nodding in apparent approval at one point and patting the rear end of one of the horses at another point.

Trump made no public comments. He and the first lady greeted Smith before they went back inside the White House.

The fir will go up in the Blue Room, where every year it becomes the centerpiece of Christmas at the White House. A massive chandelier that hangs in the oval-shaped room is removed to accommodate the tree, which is trimmed slightly and anchored to the ceiling for stability.

The tree’s arrival ushers in a month of holiday festivities at the White House and its environs.

On Tuesday, Trump plans to participate in another seasonal rite: pardoning the National Thanksgiving Turkey. A pair of birds named Peas and Carrots are the candidates for this year’s act of presidential mercy. Trump is also expected to help light the National Christmas Tree on the Ellipse later this month.

After the pardons, the first family will head to Florida to keep their tradition of spending Thanksgiving at Trump’s estate in Palm Beach.

While the family is away, the White House an army of volunteer decorators, florists and others from across the country will work throughout the holiday weekend to transform the 132-room mansion for Christmas.

White House kitchens will go into overdrive preparing the food and desserts that will be gobbled up at dozens of parties and receptions the Trumps will host in December before they head back to Florida to celebrate Christmas and ring in the New Year.

Mrs. Trump is expected to unveil the holiday decor after the family returns from Thanksgiving in Florida.

Christmas planning at the White House is a monthslong process.

In July, Mrs. Trump tweeted a photo of herself and a designer in the White House Map Room as they looked over holiday concepts.

“Planning is underway for this year’s #Christmas at the @WhiteHouse!” she wrote. “There is still a lot of work to be done, but I hope everyone will enjoy our final holiday vision for the People’s House.”

Her theme last year was “Time-Honored Traditions,” a nod to 200 years of holiday celebrations at the executive mansion.

The White House grounds superintendent and the chief usher picked the fir during a September trip to Smith’s farm, making the Trumps’ inspection and approval of the tree a formality.

The president’s appearance was unusual. The annual tree delivery traditionally has been an event for White House staff or the first lady. The White House Historical Association said Monday it could find no evidence of a president ever joining the first lady to accept the tree.