A US State Department official on Thursday denied restricting visas for Chinese students, despite the growth of Chinese students in the United States slowed to a 10-year low this year. 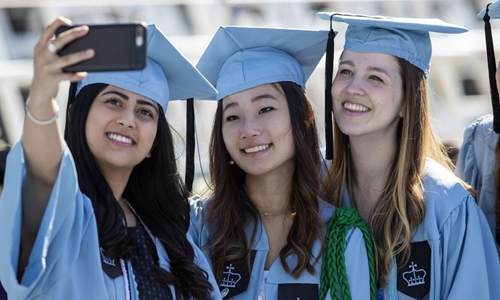 The file photo shows that graduate students take a selfie before the Columbia University Commencement ceremony in New York, the United States, May 22, 2019. (Xinhua/Wang Ying)

"The US president recently said out of the oval office we welcome Chinese students into our universities. Our visa policy is matching our discussion," Caroline Casagrande, deputy assistant secretary for academic programs in the US State Department's Bureau of Educational and Cultural Affairs, told Xinhua.

Speaking on the sidelines of an event at the Chinese embassy celebrating the 40th anniversary of China-US student exchange, Casagrande said statistics support the fact that a higher percentage of visa applications are being approved.

"We are putting more resources than we ever have to let Chinese students know that they are welcome in the United States," she said.

However, Chinese students and parents have complained about a higher risk of visas being denied or put on a grueling process known as administrative check, despite having secured an offer from a US university.

Brad Farnsworth, vice president of American Council on Education, a group that represents US colleges and universities, expressed concern with the US visa process.

"We want that pathway (of coming to the United States) to be very clear and very transparent and very predictable. And what we're hearing from Chinese students is that's not always the case," he said.

According to a recent report by the Institute of International Education, the number of Chinese students studying in the United States increased 1.7 percent year-on-year, the slowest in the past 10 years.