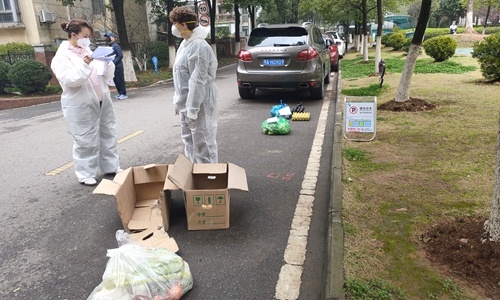 Imagine moving to China to pursue a new career in education only to encounter an epidemic so severe that it would lead to the city you live in to close down and reaches the point where you had to wear professional-level protective gear to go outdoors.

One such "lucky" person is Megan Monroe, a young US woman from Corona, California, who came to Wuhan, Central China's Hubei Province, to teach English in December 2019, but then found herself living an interesting and incredible life after the outbreak of COVID-19.

Monroe took the full-time job as an English teacher in Wuhan to get her teaching credentials. She never expected that an outbreak of coronavirus would turn all her plans upside-down.

"When the epidemic first broke out, my supervisor and I were scrambling to get food and other necessities and weren't too focused on work," she told the Global Times on Sunday.

"The local government should have announced the coronavirus earlier, but I understand that they didn't know how terrible it would turn out to be," she added.

Although the US arranged to have its citizens evacuated from the city, Monroe decided to stay in Wuhan as she felt living alone in her apartment in the city was safer than putting her in a two-week-long quarantine in her mother country. Monetary concerns were also a reason. "The United States is charging its citizens $1,100 to return, while my friends from Morocco were flown home for free," she complained.

According toMonroe, the area she lives in is on the outskirts of Wuhan. where there had not been any cases when the flights were announced.

"Everyone's worried about me at least to some extent, but my parents know I'm a tough cookie. Even if I got the virus, I'm sure I'd be able to fight it off," she said.

Since the lockdown of Wuhan, the epicenter of the virus, Monroe has been sharing videos about her life in the city on TikTok and Instagram, as well as producing lessons including audio recordings, video clips, and other little tidbits for her students every day.

Additionally, she volunteers in her residential community to help distribute goods to residents. She said her company has helped the community by finding food distribution centers and organizing groceries to be delivered since most residents are not allowed to go out of their homes without some sort of permit.

She shared her experience volunteering on TikTok. In the video, Monroe can be seen wearing gloves and a hazmat suit as she delivers big bags of vegetables, eggs, fish to residents who ordered them online. She explained that the service is a type of "no contact" distribution, and that she was very delighted to help the community.

"I felt nice to be out of the apartment and interacting with people. Even though I can't speak Chinese yet! I could still empathize with these people," she said.

Monroe said a lot of people she knows have also followed her TikTok account to stay updated on her life. The videos have touched many Chinese netizens, with many expressing their thanks in the comment section.

"Love does not have a border. Thank you, our foreign friend. We care about you and hope you can protect yourself," one Chinese netizen wrote.

However, some people abroad who have been fooled by fake news about the COVID-19 in China have come to doubt her.

"The few times I have looked though, about two percent of people are super insensitive. A lot of people doubt that I'm even in China; some people say the government is paying me off to say this."

Fortunately, positive comments have far outweighed the negative and Monroe said she is happy that she "can be an honest news source for people."

Besides helping others, Monroe has also received help from netizens on her TikTok account, as well as her community and company.

"My mom shipped me a package a month ago, and it made its way into Wuhan within the last week." Most post offices and depots are closed, but under her boss's help, she finally got the package. "The pickles and pepperoni have definitely raised my spirits," she said.

Although Wuhan, the first Chinese city that she has traveled abroad for her career has suffered such a severe epidemic, she still loves it.

"It's the biggest, most beautiful city I've ever been in. I'm a bit stir crazy from being inside so much, but now I just have even more of a passion to explore the world around me once this all clears up," she said.

Monroe plans to stay in China for a couple of years to learn more about the country and Chinese culture.

"I want to keep exploring Wuhan. I want to eat all the different food, take the metro on random adventures and keep trying to make more friends here," she said.