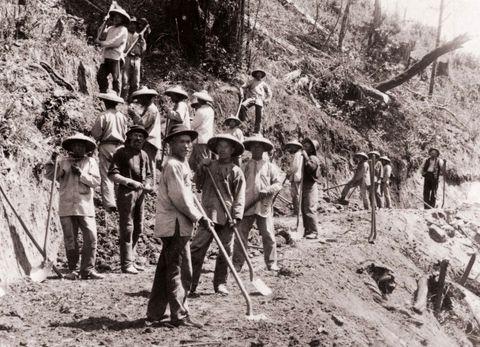 SALT LAKE CITY, the United States, May 10 (Xinhua) -- US Secretary of Transportation Elaine Chao on Friday paid tribute to the contributions of railroad workers, especially those from China, in US economic transformation through the transcontinental railroad 150 years ago.

"The transcontinental railroad was a tremendous feat of engineering, innovation and manpower that was key to the economic development of the United States, and today, we pay special tribute to the diverse workforce - especially 12,000 or more Chinese laborers - that built this seminal infrastructure project that transformed America," Chao said.

The conditions were merciless, dangerous and harsh, Chao said, noting that an estimated 500 to 1,000 Chinese workers lost their lives.

Chao made the speech at Promontory Summit in Salt Lake City, US western state of Utah, at the 150th anniversary of the Golden Spike ceremony, which marked the completion of the first American transcontinental railroad. The railroad shortened travel time between New York City and San Francisco from six months by wagon to about one week.

The ability to move people and goods across the continent more rapidly and at much lower cost led to rapid economic growth, bringing benefits not only to coastal cities, but communities in the interior regions, Chao said.

The Golden Spike was the final spike driven into the railtrack to join the Central Pacific and Union Pacific railroads, creating the transcontinental railroad. It connected the eastern US rail network with the San Francisco Bay.

Chao is the first American of Chinese ancestry to serve as US secretary of transportation.