US vloggers bid farewell to fans on TikTok after Trump threat 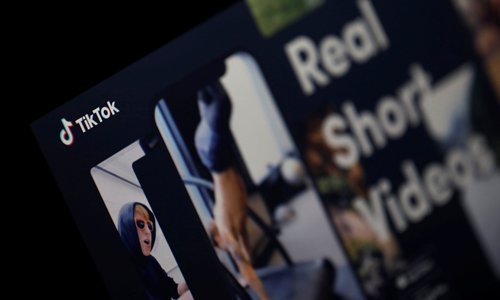 The logo of TikTok application is seen on a screen in this picture illustration taken February 21, 2019. Photo: VCG

US vloggers started to bid their final farewells to fans on TikTok, a popular video app owned by Chinese company ByteDance, after US President Donald Trump threatened to ban the app from the US on Friday.

The hashtag "Trump to ban operation of TikTok in the US" and "TikTok vloggers say goodbye to their fans" have earned 510 million and 280 million views respectively on China's Twitter-like Sina Weibo as of Sunday morning.

The US' harsh threat against the Chinese-run business has enraged many Chinese netizens, with some questioning the country's core values of "freedom" and "democracy."

"TikTok complies with US laws and regulations. The data is managed by Americans, and the executives have also been replaced by Americans. But now, they still want to ban the poor app, it is such an evil act," one Chinese netizen wrote on Weibo.

In a video that has gone viral on Sina Weibo, many vloggers can be seen waving their hands and saying goodbye to their fans.

One vlogger said TikTok has changed his life: He has bought a house and is financially supporting his family with the support of his 36 million followers.

"Leaving [TikTok] can be a huge problem," he said in a vlog.

Some vloggers have been staying up late to post video tutorials teaching viewers how to change their region on TikTok to their neighboring country, Canada, to avoid the risk of being banned in the US, while some are teaching their fans how to register on Douyin, the Chinese version of TikTok.

Many Chinese netizens expressed sympathy for the vloggers.

"Video creation is very difficult and it took a long time for those vloggers to attract so many followers. It is unfair to ban their accounts," one Chinese netizen posted.