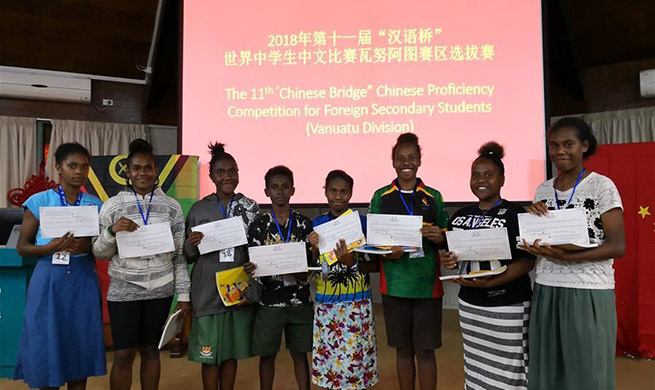 The 11th "Chinese Bridge", the Chinese Proficiency Competition for Foreign Secondary School Students in Vanuatu Division was held on Friday in the Confucius Classroom at the Emalus campus of the University of the South Pacific with the participation of 15 students.

The 15 contestants were from Central School, Vila East School and Malapoa College. The top two winners will be travelling to China to represent Vanuatu in the further rounds this October.

The contestants were evaluated from three aspects: self-introduction, talent show and Q&A. Although the majority of them have been learning Chinese for less than six months, their clear pronunciation, fluent response and marvelous talent show reflect their Chinese competence, their understanding and love for China and the Chinese culture.

As one of the contestants, Sandy Madilson, a 15-year-old student, told Xinhua that the Chinese language is unique and very interesting, she wants to learn it well and help increase the mutual understanding and cooperation between the two peoples of Vanuatu and China.

Yang Hui, Chinese director of the Confucius Institute at the the University of the South Pacific, said that this competition is very important and has positive influence as this is to check the students their study of the Chinese language and encourage them to continue their study of it.

For his part, Ruben Markward, director of the Emalus campus at the University of the South Pacific (USP), voiced his satisfaction with the competition.

As a useful platform and bridge, Confucius Institute has not only enriched his campus' study, but also helped deepen the friendship between the two countries, he said.

The Confucius Classroom at Emalus Campus of USP in Vanuatu was officially inaugurated in May 2015. It has held four Chinese Bridge competitions since its establishment, with eight Vanuatu's middle school students being sent to China to study Chinese and learn about the Chinese culture.