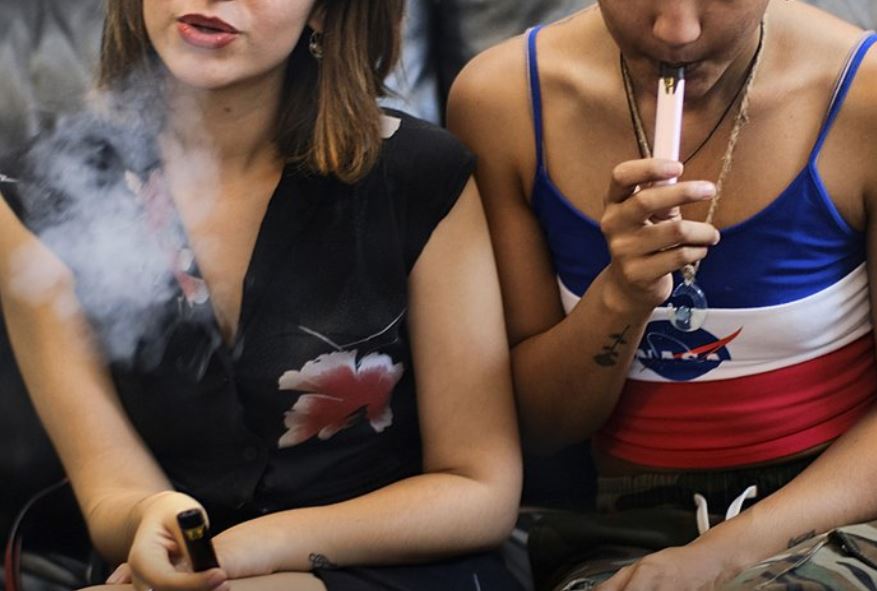 Los Angeles (People's Daily) -- The increasing popularity of vaping among teenagers across the United States, combined with mysterious breathing illnesses and deaths indirectly linked to e-cigarettes, have prompted health authorities in many states to start cracking down on the industry.

There has been a nationwide backlash following reports that more than 1,000 people have been diagnosed with severe lung illnesses, plus at least 18 deaths, all allegedly associated with vaping.

States including New York, Michigan and Rhode Island have banned vaping flavors, while Illinois, New Jersey and Delaware are considering doing the same. Massachusetts has gone a step further by opting to ban sales of all vaping products for four months. And the federal government is considering banning e-cigarette flavors that appeal to underage users.

In California there is no blanket ban on vaping products, at least not yet, but Governor Gavin Newsom has issued an executive order focused on curtailing the state’s youth vaping epidemic. Among other actions, the order sets aside $20 million for a vaping awareness campaign. It also calls on state agencies to develop recommendations for limiting the sales of vaping products to anyone under the age of 21, and the sales of illegal and counterfeit vaping products broadly.

San Francisco became the first city in the country to ban e-cigarettes earlier this year and in Los Angeles, the city council on December 5 approved a citywide ban on flavored tobacco products, including menthol cigarettes and hookah.

A report by City Attorney Michael Feuer stated, “The City Attorney’s Office recommends nothing short of a citywide ban on the sale of all flavored tobacco products, without exception, as the best option to protect our current generation of youth.”

Meantime, Los Angeles County has outlawed flavored tobacco products, including e-cigarettes, chewing tobacco and menthol cigarettes, due to concerns that the products appeal to young people.

Health experts think e-cigarettes are less harmful to adult smokers than traditional cigarettes because they don’t contain all the cancer-causing byproducts of burning tobacco, but there’s not much in the way of research on the health effects of the vapor produced when e-cigarettes heat a liquid with nicotine.

“I think this rush to judgment is extraordinary, and we might be looking at the demise of vaping,” Kenneth Warner, professor emeritus at University of Michigan’s school of public health, told the Associated Press.

Of the hundreds of lung illness cases reported nationally, the vast majority of patients said they had vaped products containing THC, or tetrahydrocannabinol, the ingredient in marijuana that produces a high. Nearly one-fifth said they had only vaped nicotine products.

Even though no single vaping product or ingredient has been directly linked to the illnesses, America’s leading e-cigarette maker Juul has pulled all of its advertising from TV, print and digital platforms and replaced its CEO.

In a statement, Juul said that it has long focused on providing adult smokers with alternatives but recognized that there’s “unacceptable levels of youth usage and eroding public confidence in our industry.”

E-cigarettes have been largely unregulated since they first surfaced in the US in 2007. The Food and Drug Administration (FDA) has set May 2020 as a deadline for manufacturers to submit their products for review.

So, the main focus is how to keep young people from starting to vape in the first place.

Health officials have said vaping may be a less-deadly alternative for adults who are trying to quit smoking, but they’re worried about kids using the devices. Nicotine is harmful to developing brains, and surveys suggest that as many as 1 in 8 high school seniors vape nicotine daily.

The CDC has warned that what’s in vaping products is not well understood. It’s also worried that e-cigarettes could become a new way of introducing kids to nicotine and potentially hooking them on tobacco products in the future.

The agency has said that vitamin E acetate (an ingredient added to some THC products) appears associated with vaping-related illnesses but stressed that its findings are inconclusive and more than one chemical could be contributing to lung damage.

The upshot of the whole thing is that no one knows for sure what’s causing these illnesses, so health officials are cautioning people to not vape at all until the cause is identified.