It is rare for a historical artifact to be returned by the Vatican museums, which has one of the largest collections of art and archaeology. Photo: AFP 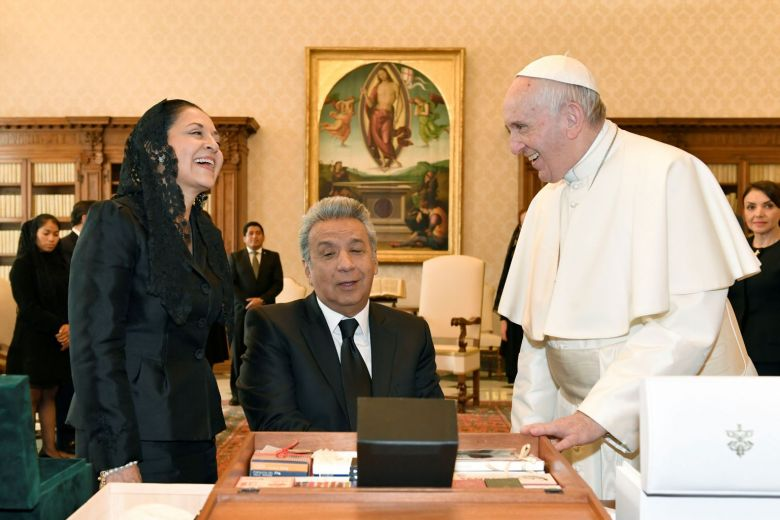 Pope Francis talks with Ecuador's Moreno and his wife Rocio during a private audience at the Vatican. Photo: Reuters

The Vatican museum has returned a shrunken head to Ecuador, relinquishing the wizened cranium of an Amazon warrior nearly 100 years after it was taken by a missionary.

The grisly body part -- which belonged to the Shuar indigenous people -- was handed over during Ecuadorian President Lenin Moreno's visit to Pope Francis on Saturday after months of negotiations, the Vatican said.

It is very rare for a historical artifact to be returned by the Vatican museums, which boast one of the largest collections of art and archaeology in the world.

The fist-sized capitulum, which never went on show, is believed to have been a war trophy for the Shuar, who mummified and kept the heads of their warrior enemies, as well as their heroes.

The Shuar are still one of the most important ethnic groups in the Amazon region. In recent years they have hit the headlines for attempting to resist government-authorised large-scale mining on land they claim as their own.

They used to be best known in the West for their shrunken heads -- called "tsantsa".

Removing the skull, boiling the flesh then sowing up the eyes, nose and mouth is believed to have trapped avenging souls inside, or stored the wisdom of their elders.

The head, brought to the Vatican by a missionary in 1925, will be given to the Pumapungo ethnographic museum in Cuenca.