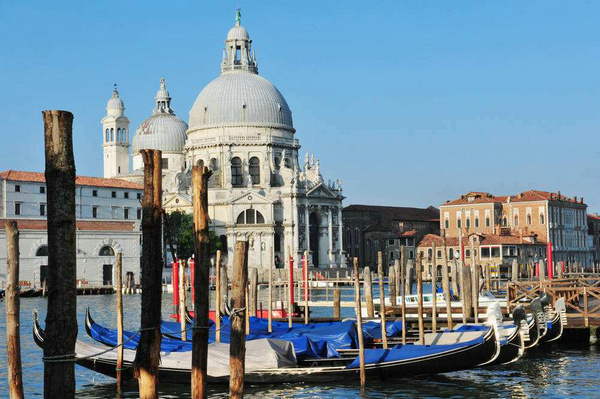 Venice, Italy's famed canal city, is struggling with the lack of tourists due to the COVID-19 pandemic. (Photo: Xinhua)

VENICE, Italy－A year ago, Venice was on the front line of Italy's growing battle against mass tourism.

Now, as Italy is recovering from the impact of the COVID-19 pandemic, including a dramatic drop in tourism, locals are split over whether they want to return to the way things used to be.

Before the pandemic, Italy's famed canal city received about 4 million tourists a year. The city started charging a 10 euro ($11.5) tourist tax to raise cash to protect infrastructure and curb the number of daytrip arrivals.

There were occasional clashes between the city's dwindling local population and the tourists who filled its alleyways and bridges.

Today, the city seems empty by comparison, with a light trickle of tourists, almost all from other parts of Europe. Most chatter on the streets is in Italian, much of it with the distinctive Venetian accent.

Many stores, restaurants and hotels remain boarded up. Economic analysts say many will not reopen, despite the easing of the national lockdown that the government put in place in March.

Before the outbreak, Venice was already struggling－not just from too many tourists but also from historic floods that inundated the city for days last November.

Now, many beleaguered locals are just enjoying the rare occasion to have the city to themselves.

"We've been through so much that what I value the most now is being able to stretch out in the sun and just relax with a gelato or something to drink and not have to worry about a tour group tripping over my feet or people shouting at each other in a language I don't understand," retired teacher Letizia Stefani says.

"It can't stay like this forever, but there's something nice about having the city to ourselves, at least for a while," the government office worker says.

"I see people I know when I'm walking my dog, and we stop and chat. Before, during the high season, we'd all be lost in a crowd of tourists."

Italy opened its borders to tourists from most European countries in June, but there have been few arrivals. Noticeably absent are travelers from the United States, China and other places further afield.

Luigi Brugnaro, who is running for re-election as Venice's mayor, has said the city has to take steps now to ensure it's ready when tourists return in bigger numbers.

That involves reinforcing infrastructure, including the unveiling of the "Moses" system designed to help protect the city from floods. The tourist tax remains on the books and will be applied again when numbers rise.

That day can't come soon enough for many cash-strapped shopkeepers and restaurant owners.

"We are really struggling with the lack of tourists," says Marco Zanin, who owns a shop selling glass products made in the city.

"We cursed the high number of tourists before, but now we miss them because we have no business. We went from one extreme to another. It's a shame we can't take an average from the numbers we had last year and the numbers from this year."

"We usually earn enough in the summer to make it through the slow period when the weather turns cold," Bordignon says.

"Now, I'm losing money in what is supposed to be the high season. It's going to be a challenge to find a way to survive until next year."