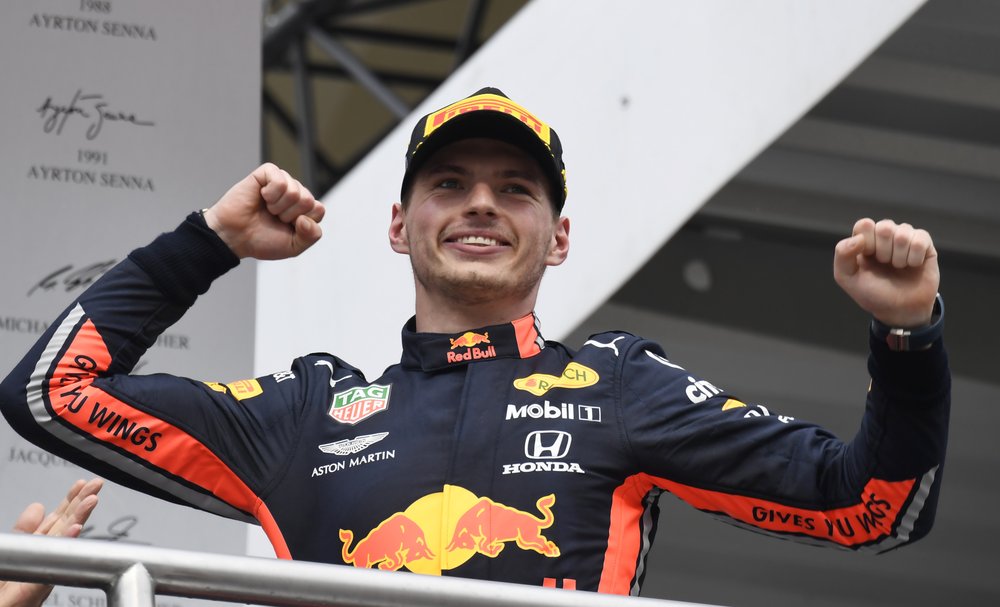 Red Bull driver Max Verstappen of the Netherland's celebrates on the podium after he won the German Formula One Grand Prix at the Hockenheimring racetrack in Hockenheim, Germany, July 28, 2019. (Photo: AP)

Verstappen kept his composure on a treacherous track to clinch his second victory this season and seventh of his Red Bull career, topping a surprise podium ahead of Ferrari’s Sebastian Vettel — who started from last — and Toro Rosso driver Daniil Kvyat.

“It was amazing to win, it was really tricky out there, you had to be focused,” Verstappen said. “It was about trying to not make too many mistakes. You learn over the years. I’m very happy with the result.”

Following this week’s crushing heatwave, wet weather caused Hockenheimring havoc as drivers took up to six pit stops for new tires and several crashed at the same spot where a section of tarmac was notoriously slippery.

Ferrari driver Charles Leclerc was in contention for a podium, despite starting from 10th, but crashed after switching for quicker tires and slid off the track, over the gravel and into the barriers.

Remarkably, Hamilton had the same mishap moments later, mangling his front wing after losing control at the same corner. He came in for a new wing and tires, but it took Mercedes by surprise and a painfully long stop cost him any chance of victory.

For Vettel it was a remarkable turnaround, and almost the opposite to last year — when he crashed near the end after leading the race from pole position and Hamilton won, having qualified only 14th.

“It was a lot of fun, it was very tough to read what the smartest move was in the conditions,” Vettel said. “I stayed tidy in the whole race. Congratulations to Max, he was superb.” 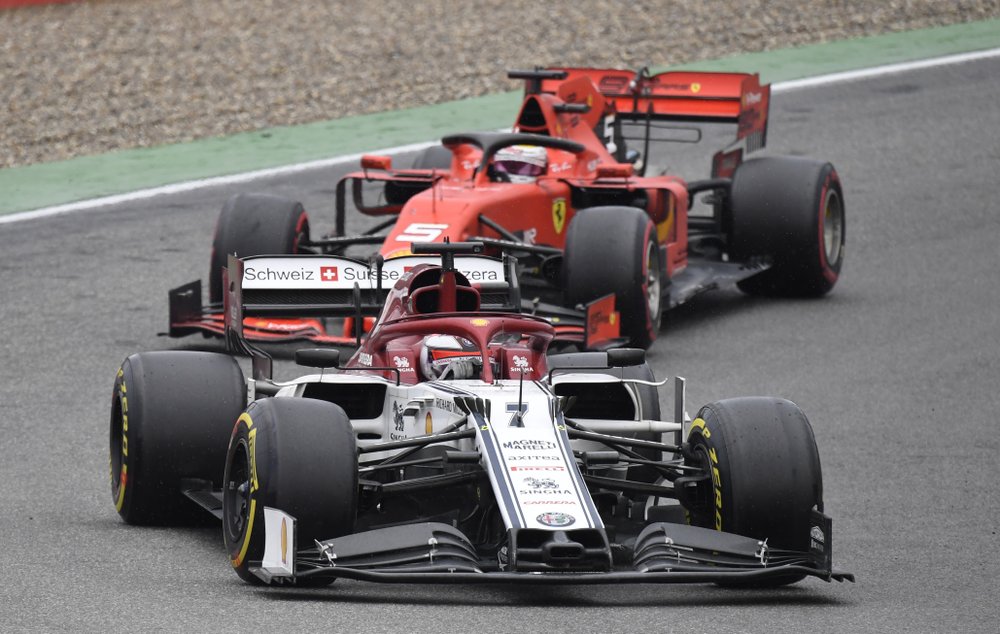 The red-clothed Ferrari mechanics and engineers mobbed the four-time F1 champion, doubtless relieved after the team’s botched qualifying on Saturday. Vettel could not even get out on track to set a time and Leclerc’s qualifying bid was undone late in the session, forcing him to start 10th.

For Kvyat it was a third career podium but, above all, a point proved.

The 25-year-old Russian driver was ruthlessly replaced at Red Bull by Verstappen after just four races of the 2016 season, and could not even get a seat in F1 last year.

“Amazing to be back on the podium,” Kvyat said. “The race was crazy. Incredible roller-coaster, like my whole career.”

The track was drenched by the time the race started.

For safety reasons, a safety car was deployed.

Verstappen and Hamilton both expressed frustration over their team radios as drivers were stuck doing formation laps for several minutes before the safety car finally rolled away and the race started.

When they did get underway Verstappen stalled his car, dropping from pole position to fourth as Hamilton, Kimi Raikkonen and Bottas overtook him.

Just two laps into the race, the safety car came out — the first of several times — when Sergio Perez slid off the track and clipped a wall.

It was to be a familiar sight as seven of 20 drivers failed to finish the race — Pierre Gasly (Red Bull), Nico Hulkenberg and Daniel Ricciardo (both Renault) and McLaren’s Lando Norris being the others.

Late on in the race, an exasperated Hamilton complained to his team over race radio as he lagged in 14th spot.

“How’s it got this bad?” said Hamilton, who made a remarkable total of six pit stops.

It was the only statistic on which he led.

Although the five-time F1 champion gained a couple of places back, he almost did not finish the race at all, somehow retaining control of his Mercedes after spinning at full speed with 10 laps left.

Still, it made no difference to his overall lead as he remains 39 points ahead of second-place Bottas, who is now only 22 points clear of third-place Verstappen.

Bottas will hardly have done himself any favors as he bids to earn a new contract with Mercedes for next year.

Chasing the unheralded Lance Stroll, in a far slower Racing Point car, Bottas could not get past and went zooming off track.

Vettel showed him how to overtake, getting past Stroll and then Kvyat in the blink of an eye to seal a remarkable podium finish in one of the most extraordinary F1 races in years.

Since Hamilton’s uneventful win from pole at the French GP last month, F1 fans have been treated to three excellent races: Austria, Britain and now here.

But in terms of unpredictability and sheer glued-to-the screen drama, this was the best.

Touted as the future star of F1 when becoming the youngest driver to win an F1 race at the age of 18 — at the Spanish GP in May 2016 and on his Red Bull debut, no less — Verstappen did much to make this a race to remember.

Verstappen has added maturity to his astonishing speed and brazen audacity. To cap off his day, he picked up an extra point for the fastest lap.

After Perez’s crash, the race re-started on lap 5, with Hamilton leading Bottas, Verstappen and Leclerc.

The safety car flag appeared again — on Lap 15 of 64 — because Ricciardo’s car stalled. Then, after yet another safety car delay, drivers started taking risks to gain an edge.

Leclerc changed his tires for the third time — moving onto the quicker slicks with Hamilton doing likewise.

Within seconds Leclerc’s race was over.

“Noooo!” Leclerc screamed as he realized his race was over, shaking his head furiously as his bid for a fifth straight podium ended.