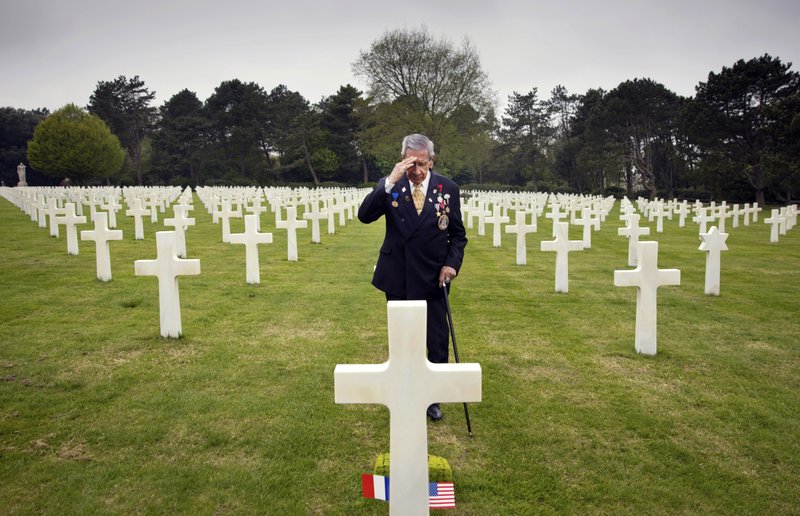 On Friday’s 75th anniversary of the end of World War II in Europe, talk of war is afoot again — this time against a disease that has killed at least a quarter of a million people worldwide.

Instead of parades, remembrances and one last great hurrah for veterans now mostly in their nineties, it’s a time of coronavirus lockdown and loneliness, with memories bitter and sweet — sometimes with a lingering Vera Lynn song evergreen in the background.

For so many who went through the horrific 1939-1945 years and enjoyed peace since, Friday felt as suffocating as the thrill of victory was liberating three quarters of a century ago.

It sounded like a cry from some past, bellicose era or a Hollywood movie, but instead it was French President Emmanuel Macron speaking in a March 16 national address. He used the phrase “we are at war” six times to emphasize the threat of COVID-19 to his country as he announced a lockdown well-nigh unprecedented since World War II in its restrictions on personal freedoms.

Close to France’s Normandy D-Day beaches where he fought in perhaps the most momentous day of that war — the June 6, 1944, landings of allied troops in Nazi-occupied France — former US army medic Charles Shay was listening to Macron.

Now 95, he said surviving D-Day at 19 taught him this much. “When my time comes there is not much I can do about it.” Yet Macron’s comparison didn’t fully fit his experience.

“World War II was created by a madman who thought he could take over control of the world,” Shay said. But with the virus, “we still don’t know why we are dying.”

Cloistered in his village of Bretteville-l’Orgueilleuse amid purple wisteria and pink peonies, he feels frustrated at all the cancellations that won’t let him see fellow veterans on Omaha Beach in the coming weeks — ageing friends he might never see again.

It is thus across much of the world, with parades scrapped from Moscow to London and the United States.

The sense of wistful melancholy hangs as a heavy, dark cloak over the countries that were victorious in 1945.

In few regions is VE Day celebrated with more fervor than in the former Soviet Union, whose Red Army paid a terrible toll before the final breakthrough to Berlin. Eight time zones east of Normandy, Valentina Efremova, 96, lives among the memorabilia of her Great Patriotic War when she was a nurse caring for front-line Soviet soldiers.

She still dresses for the occasion and carries a chestful of medals.

She, too, had been counting on something better so late in her life and is downcast on the chances of being able to attend some last worthy ceremony.

“We’re the last remaining veterans. We won’t be able to celebrate the 80th anniversary,” she said.

“THE DANGER DID NOT COME FROM THE AIR WE BREATHE”

Some say today’s younger generations should put things into perspective when lamenting their lockdown hardships such as closed barbers, restaurants, bars and gyms. Many still have full fridges, and a strange knock on the door will likely be nothing more sinister than an online order delivery.

Compare and contrast that with Marcel Schmetz and Myriam Silberman. Through a twist of geographical fate, Schmetz’s family home became part of German territory as the Nazis invaded Belgium, and although he was too young, his brother Henri, at 17, had to join the German army — a potential death sentence.

“So we succeeded in hiding him at home while we had German soldiers around our house practically every day. He remained locked up like that for a year and a half,” Schmetz said,

He now runs a war museum with his wife Mathilde, where part of the Battle of the Bulge, Hitler’s last bid to change the tide of the war, took place and he has re-created the old family room, where a mannequin dressed as Henri is sitting. But what was supposed to be the highlight of the year is now spent in isolation in the shut-down museum.

The current-day war comparison especially grates with 82-year-old Myriam Silberman, who as a kid had to hide under a fake identity in Belgium’s southern city of Mons for three years because she is Jewish. If discovered, she would likely have been deported and murdered.

“Today’s generation might think that there is maybe a link but this is incomparable,” she said. “I was five years old, but I could go out as the danger did not come from the air we breathe. The danger came from potential traitors ... we were living with a permanent fear, even as children.”

Amid the bleakness of the pandemic, some veterans still know how to win that 2020 war too — spurious comparison or not. Take Tony Vaccaro, 97. He was thrown into World War II with the 83rd Infantry division which fought, like Charles Shay, in Normandy, and then came to Schmetz’s doorstep for the Battle of the Bulge. On top of his military gear, he also carried a camera, and became a fashion and celebrity photographer after the war.

COVID-19 caught up with him last month. Like everything bad life threw at him, he shook it off, attributing his survival to plain “fortune.”

But for the longevity that is allowing him to celebrate the 75th anniversary of VE Day he has a different explanation. “Wine,” he said from his Queens, New York, home. “Red wine — Vino Rosso.”