Johannesburg (People's Daily) – Believe it or not, many black people in Africa are talented in language learning just as they are good at sports, music and dance.

After learning Chinese for less than one year, Hlengiwe Gumede and Faith Marufu, two female students majoring in biochemistry at the University of Johannesburg (UJ), South Africa, have achieved remarkable achievements.

The duo, whose Chinese names are Wei An and Wei Zhen, got the first prize and third prize respectively in the South African Preliminary Competition of the "Chinese Bridge" Chinese Proficiency Competition for Foreign College Students in May.

They studied Chinese language at a Confucius Institute, which is jointly operated by the UJ and Nanjing Tech University in East China's Jiangsu Province.

In 2016, the South African government decided to bring Chinese into its curriculum as an optional second language among all public schools, offering South African students convenient access to the Chinese language and culture study.

According to Peng Yi, a co-director of the UJ's Confucius Institute, the number of registered students studying Chinese in Johannesburg is expected to surpass 1,000 this year. 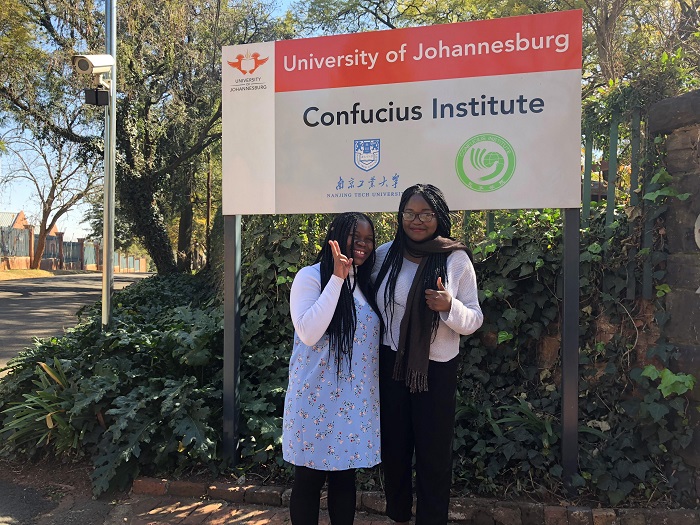 "In addition to teaching Chinese and traditional Chinese culture, we've also established close cooperation with the UJ in academic researches, and organize Taiji training, technical training and other activities at local communities," said Peng, who is also a law professor from Nanjing Tech University.

In Peng's eyes, the two awarded students are "treasures" from her institute and she promised to give them more opportunities in the future.

In July, Wei An was given the chance to participate the "Chinese Bridge" final competition in Central China's Hunan Province.

"It's my first time to China. I visited Tiananmen Square and climbed the Great Wall. I want to study in China in the future," Wei An told People's Daily reporters.

Learning Chinese is very helpful to "our future and will make us more competitive when applying for a position at Chinese companies," she added.

Peng said she would like to help the two prize winners gain scholarships in studying in China after their graduation in UJ.

She said that she is full of confidence in the future development of Chinese language teaching in South Africa, which is the most developed country in this region.

"Xi's remarks are very encouraging and give us greater confidence in future development (of Chinese teaching)," said Peng. 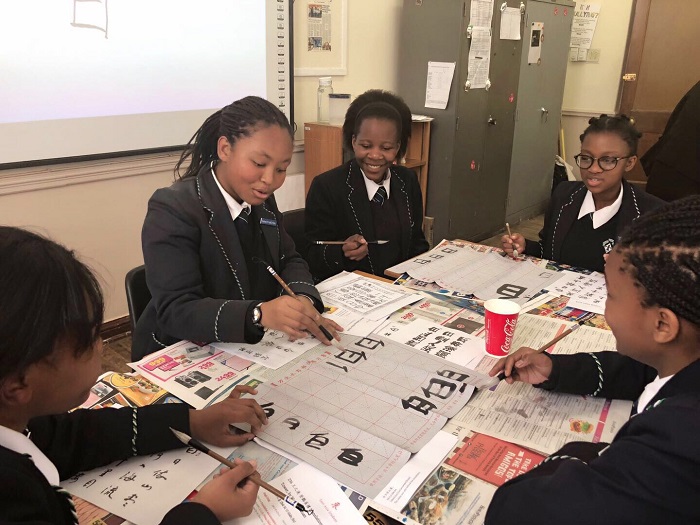 Zhang Tengfei, a Chinese teacher from the Chinese Culture and International Education Exchange Center, first led the students reciting an ancient Chinese poem and then showed them how to write the Chinese characters with a brush pen.

Myrtle Robertson, an English teacher at the school and an assistant teacher of the Chinese classroom, said she is passionate in teaching and learning Chinese despite her busy schedule.

She told reporters that her elder sister has been to China twice and is looking forward to a third time with her.

Robertson has been to China once.

"I think I've met so many really amazing people (in China). I have such high respect for the Chinese people and for the progress that China has made. It is incredible. Particularly in South Africa, we have so much to learn from you," she said.

Fei Qingming, an English teacher from a middle school in Jiangsu Province, said he has given Chinese lessons to many South African officials who will be sent to work in China.

Chinese training is very essential and beneficial, said Fei, who worked as a Chinese teacher at the Confucius Classroom in Pretoria. "Understating Chinese language and Chinese culture is crucial for their future work in China."

"After more than two years' development, more schools (in Pretoria) are voluntarily to cooperate with us," said Li. "Everything is getting better."