Village allows people with autism to develop their natural potential 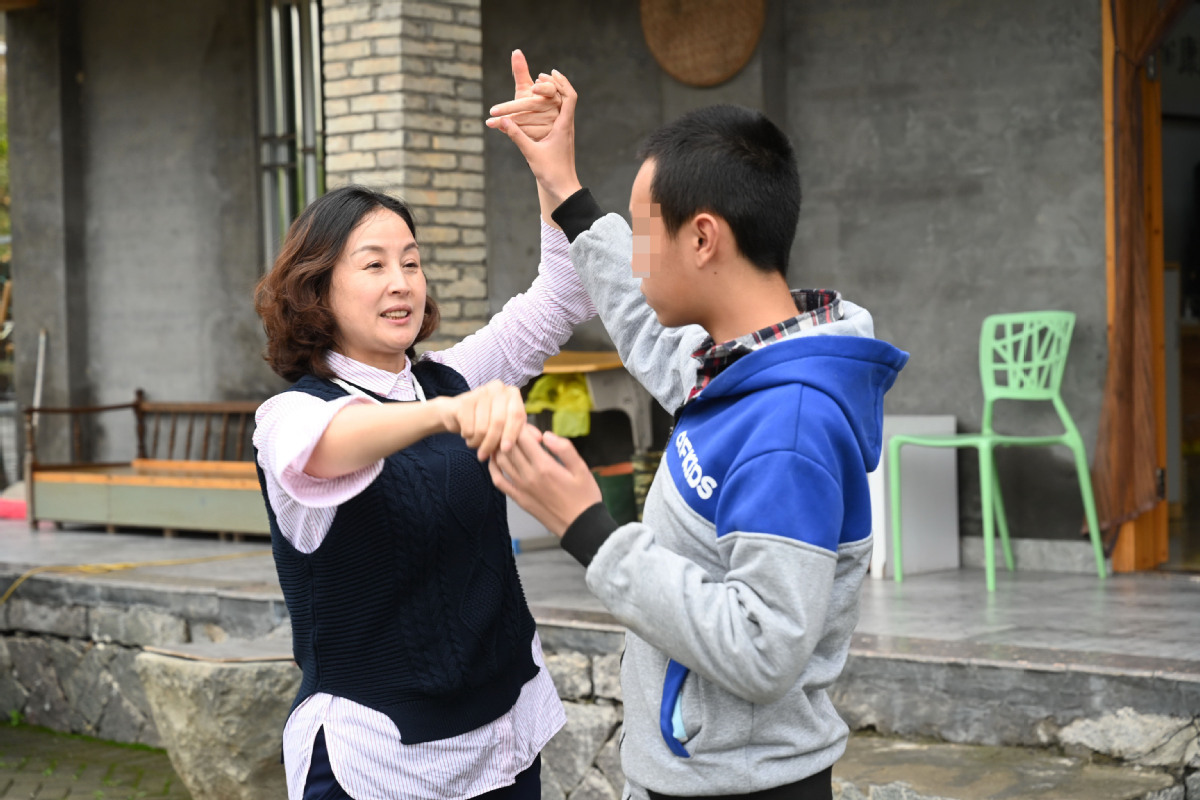 Having just woken up from their siesta, a group of young people sat down and waited for snacks in a courtyard where a sweet scent of pomelo flowers lingered.

The yard was exceptionally quiet. While eating, some of them repeatedly drew circles in the air, some tapped their foreheads with their hands.

They are people with autism, often called "children of the stars" in China. Hence the name of the two-story building: Star's Home.

"I wanted to build this place into a 'utopia' where autistic people can live comfortably," says Cao Fang, the founder.

Star's Home is in Jingxia village, not far from Fuzhou, capital of East China's Fujian province. It is now home to 21 people with autism, including Cao's son.

Cao noticed that her son was a little different in 2002. "He always crumbled every biscuit before eating. No matter how many times I taught him, it was still hard for him to put the biscuit into his mouth."

Like many parents of autistic children, Cao embarked on a thorny road of trying to help her son become "normal".

She went to Beijing and Hong Kong to learn how to educate autistic kids. She tried hard to teach him to read, speak and follow simple social rules. But to her disappointment, her boy's condition continued to deteriorate.

In 2008, her son often screamed with anger and ripped books, and sometimes stayed up all night. It was then that Cao realized she might have been on a wrong path to "cure" her child.

Autism is a neurodevelopmental disorder that involves difficulties with social interaction, restricted and repetitive behavior, and a lack of communication skills. Neither the cause nor cure of the disease is known to doctors.

According to the World Health Organization, about one in every 160 children is autistic. A report released in 2019 shows that the morbidity rate of autism in China is about 0.7 percent. Among all those with the disease, about 2 million are aged below 12.

"Every autistic individual is different. They are like leaves on a tree－none of them are the same," says Cao. "These people shouldn't be trained in a rigid, unified method but be taught according to their own character to help them adapt to adult life."

She once read an article about Hogeweyk in the Netherlands－a village designed specifically as a pioneering care facility for elderly people with dementia. All the villagers are patients with severe dementia and staff at the local bakery and markets are geriatric nurses or carers. Residents are made to feel they are leading normal lives with regular household duties.

"It took me 10 years to finally understand autism," says Cao, who added that she had given up on the idea of changing her 20-year-old son, but put more energy into building Star's Home as a place for autistic people to live comfortably.

"Merely teaching them to speak and some art skills is not enough to support autistic people to live independently," says Cao.

Lu Pinyuan, a resident at Star's Home, received training on language skills before coming to Star's Home. He can recite hundreds of poems and even have a simple conversation. However, Cao found that the talkative young man could do little more than that. He was even unable to use the toilet.

Apart from Star's Home, Cao also built a Star's Farm and a Star's Workshop. A nursing home for families of autistic people is also under construction.

Just like Hogeweyk, residents at Star's Home can work at the farm and workshop and get paid－such work can help develop their social interaction abilities.

The residents are also responsible for weeding the farmland and need to help with the cooking. They go for a 5-kilometer hike twice a day, which helps them sleep well at night. Three of the six staff at Star's Home are special education teachers who help the residents study and form healthy living habits.

"Life is tough especially for older children with autism," says Cao. "Star's Home can give them the necessary companionship and help them live happier lives. At the same time, it can attract more public attention."

Cao is now planning a second Star's Home. She hopes that more people can join her in building such centers.

At around 3 pm, each of the residents of Star's Home put on sneakers, grabbed a water bottle and lined up for their afternoon hike.

Led by Cao and other teachers, the team marched joyfully out of their home and walked into the sweet scent of pomelo flowers.