Village reaps a harvest of prosperity 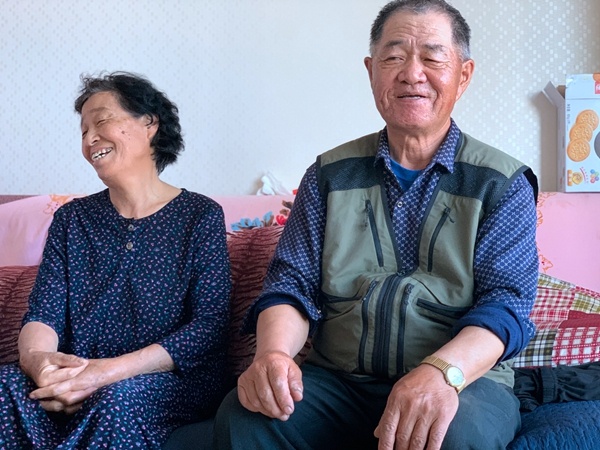 Ji Binghao now spends most of his day relaxing and watching television with his wife, Cui Shuji, without worrying about financial issues. (Photo: China Daily)

"When I was 13, I watched a film for the first time, and the images of tall buildings in a big city couldn't go away. Now I'm also living in one, filled with high-tech household appliances, just like in the film," says Ji Binghao, a 75-year-old man of the Korean (Chosen) ethnic group residing in Xinghuo village, Jiamusi city in Heilongjiang province.

Vegetables are spread out on his balcony, drying under the sunlight and turning into a delicious side dish to go with beef. A cross-stitched embroidery artwork with a pattern that says "Harmony brings wealth "hangs on the wall.

In the spring of 1948, Jin Baishan and Li Zaigen led Chosen farmers living in Jilin city to move to Xinghuo village and to cultivate wasteland for planting rice.

Later, Ji's parents joined this movement together with their 5-year-old son.

At first, the family lived in a rough wooden shelter with another 35 farmer families.

Ji recalls that there was no waterproof clothing. Boots especially were in short supply and planting rice was a time-consuming and difficult task.

"In the early morning, there was a layer of ice on the surface of water. When I put my foot in, it seemed to recoil," Ji says.

The first collective farm in China was officially opened on Feb 19, 1951.

However, in the beginning of China's reform and opening-up in the late 1970s, about 90 percent of the village's young people went to work in South Korea and coastal cities. The farmland was almost abandoned. There were only about 40 households left in the village in 2017, and 22 of them were facing poverty, earning less than 3,000 yuan ($430) per year.

However, things have changed dramatically in recent years.

According to the Party secretary of the village, Cui Zhexiu, farmland of about 514 hectares was transferred to cooperative management in 2018, and every household gained about 2,000 yuan in rent for the land plus a harvest bonus. What's more, the cooperative took charge of developing local tourism based on Chosen culture, and residents gained 55 percent of the profit made.

A construction project started last March. Now 33 empty houses have been turned into guesthouses; a 4,000-square-meter fishing park and orchards have been built for tourists. At the same time, facilities, such as a library and cinema have been established to enrich local life.

Cui claims that once the project is completed, it's estimated that the village could receive more than 100,000 tourists each year, and the income for the whole village will exceed 20 million yuan.

More than 30 villagers have returned there to work or to start up businesses.

Han Liuhua was the first person to come back. In 2018, she quit the company she ran for about a decade and left Qingdao, Shandong province.

Han's first move was to plant vegetables in a small field. She wanted to sell the crops to city customers through the internet. It worked, exceeding her wildest dreams. She soon mobilized others to join her and cultivated 115 fields of 200 square meters. Their produce includes radishes, cabbage and corn, and pickles are turned into wine.

"Now old people don't have to deal with huge swathes of farmland, they can gain a stable income more easily. And the cooperative takes whatever we provide. Nothing coming from these 115 fields is wasted or rejected," Han says.

According to the village committee, all low income families have escaped poverty, and residents now earn 7,700 yuan to 15,000 yuan yearly.

Ji and his wife grow 15 kinds of vegetables in a small field behind their house. He also goes fishing as a hobby.

Ji has a very simple understanding of prosperity. "Stay healthy and enjoy yourself."