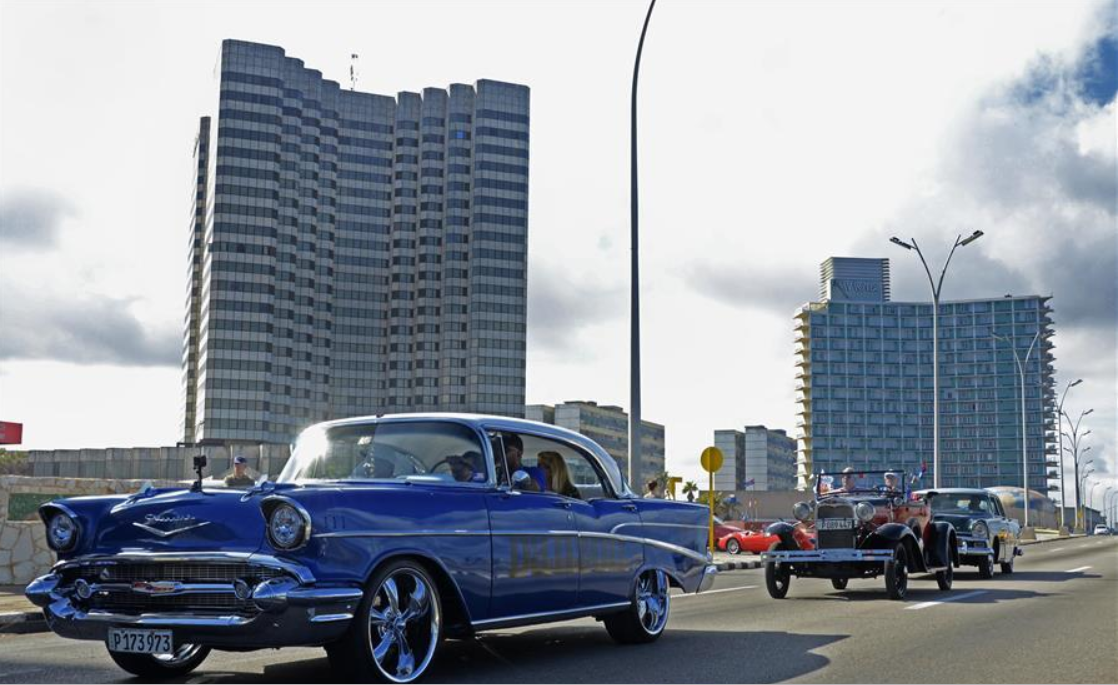 Photo taken on Jan. 5, 2019 shows vintage cars running in the streets in Havana, capital of Cuba. More than 200 vintage cars took to the streets of Havana Saturday for a contest. (Photo: Xinhua)

Considered living antiques from the first half of the last century, these vehicles are now an indispensable part of the Cuban landscape, whether for sight-seeing or as so-called "almendrones," which means vintage taxis used by Cubans for daily transportation.

A total of 208 cars were entered in the competition, among which only 15 were given prizes for being the best preserved and original.

The cars were chosen based on their technical condition, originality, external and internal condition, operation of the electrical system and other parameters.

A green 1956 Plymouth, owned since 1983 by local Ramon Ventura, was the winner as the jury estimated that it has preserved 98 percent of its original condition.

"I am very excited and the main thing of this competition is that it encourages us to keep the car as original as possible within the possibilities we have," Ventura told Xinhua after winning the prize.

The engineer said his Plymouth only has a different paint color and upholstery from the original model. The rest are the same as manufactured.

"It's a hobby that we have to dedicate a lot of time to. Since a few years ago, we can import the pieces from the United States, but they are extremely expensive," he added.

The popularity prize, chosen through online voting on the Iberostar website, was awarded to Gabriel Sanchez, owner of an impressive 1956 Chevrolet Bel Air.

"I spend a lot of my life fixing the car, keeping it in good condition and this award is the greatest satisfaction I can have in an event where there were very nice and competitive vehicles," said the 27-year-old.

Automobiles of U.S. brands such as Buick, Cadillac, Plymouth, Chevrolet, Pontiac and Ford, as well as the ones from emblematic European companies Mercedes Benz, MG and Austin-Healey, among others, were entered in the competition in an attempt to highlight the living and historical memory of the island.

"For Cuba, classic cars mark their identity, it is one of the greatest values that it has besides its people, culture and history. Many of the tourists who come to Cuba today look for these old cars that are so well preserved," said Alejandro Barrios, director of the Iberostar Grand Packard Hotel.

The Spanish hotel company, which operates 17 resorts in the country, sponsored the event to celebrate the 120th anniversary of the arrival of the first car in Cuba and the 500th anniversary of Havana that will be commemorated later this year.

"For us it is a real privilege that after 25 years of Iberostar's presence in Cuba, we can host this colorful competition with cars that are real relics still roaming the streets of the city," he said.

Hundreds of locals and foreigners came to photograph this unusual event that for many was the largest gathering of classic automobiles in Havana since vintage car clubs emerged 22 years ago.

"The goal of this event is to encourage the conservation of these cars which are an intrinsic part of our surroundings and also to display the automobile heritage that we have because Cuba is the country where the most amount of vintage cars are rolling," said Pablo Alvarez, technical director of the competition.

The car expert and owner of a 1958 Chevrolet Bel Air said there are so many varieties of classic cars in Cuba that it was difficult to choose a winner.

"It was a close race with very original cars that are already part of our cultural heritage," he said.

In Cuba, most of these cars are from the 1950s, the golden age in the manufacture of American vehicles.