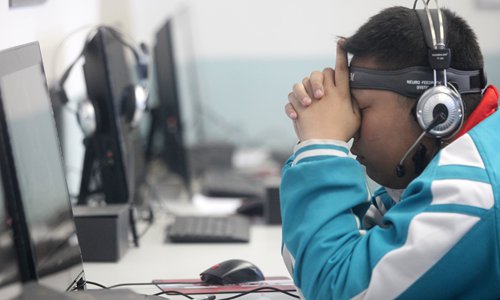 A student at a middle school in Tianjin takes a break during training aimed at improving his focus on March 14, 2014. (Photo: IC)

A US-based brain research company is under fire in China after the photo of a group of Chinese students wearing its head-band device during class went viral.BrainCo said on Thursday night that the controversial picture showing Chinese pupils wearing brain-bands was from an experiment to test the effects of their product on children's ability to focus.Meanwhile, an education expert said that in order to strengthen children's focus, schools should make lesson content more interesting.Class experiment"The picture was from an experiment on raising children's focus in a study we undertook in March," Yang Zhangpeng, head of public relations in BrainCo, told the Global Times on Thursday.The experiment took place at the Jiangnan Experimental School of Mudanjiang, Northeast China's Heilongjiang Province, not in Hangzhou, East China's Zhejiang Province, as many media had been reporting, according to Yang.He said that students from two classes took part in the experiment. One class of around 40 children wore the devices which detected their brain activity to record their level of attention. The other class of students served as the control group. The company believed that through recording and the use of certain training methods, children's attention level could be raised."Before the experiment, we acquired the consent of parents and the school. The school was happy about it," Yang said.The Boston-based BrainCo opened its Chinese branch in December 2018. According to its website, the company is incubated in the Harvard Innovation Lab and develops brain-machine interface technology products.In China, the company aims to promote their devices and training courses to families and afterschool agencies, marketing them as tools to boost students' attention while studying.Yang said their product initially targeted primary school and junior high school students, but now many college students preparing for postgraduate entrance exams are their customers. On BrainCo's online shop on e-commerce giant JD.com, 10 to 20 of their products, each priced at 3,499 yuan, are sold every day.The picture, which was posted earlier this month on Sina Weibo, showed dozens of students in uniform sitting in a classroom wearing head-band devices. Other pictures showed the software for monitoring and recording children's attention during class, according to a report by supchina.com on April 5.The pictures went viral in the media. A report in Italy's La Republica called it a "horror scene."Whatever worksTrying to find different ways to raise children's attention in order to improve their academic performance is not uncommon in China."My 5-year-old niece started attention training courses outside kindergarten when she was only 3," Li Ai from Daqing, Northeast China's Heilongjiang Province, told the Global Times on Sunday. "In the courses, she learned associated memory, reciting ancient poems, and logic.""Her mother and grandmother were very satisfied with her 'change,' but I have doubts about the effects, as children of my niece's age can learn anything quickly," Li said.Apart from such afterschool training courses, media reported that a Hangzhou primary school used finger exercises as a training method to boost students' attention, and a kindergarten in the same city chose yoga for the pre-school children.Chu Zhaohui, a research fellow at the National Institute of Education Sciences, told the Global Times on Thursday that "if it was a one-off experiment, it's fine, but schools should not try to improve children's attention through such training methods."Chu noted that children's ability to pay attention is dependent on the subject. "If they are interested in the subject, they will naturally pay attention." He suggested lessons could be designed to be more interesting and children could play more active roles during study."If a certain child pays less attention, they could be corrected through some methods. But the correction should not be applied to a whole class of students," Chu said.