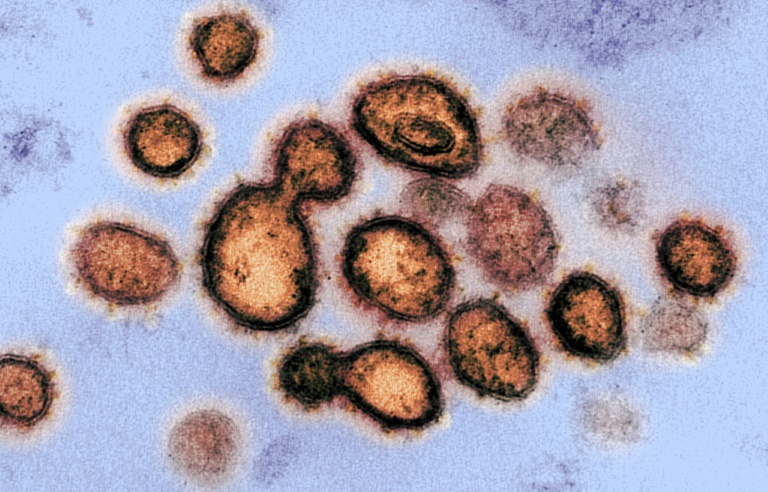 While their origins are uncertain, viruses have left their imprint on nearly all life on Earth, including humans. (Photo: AFP)

They're as old as life itself but scientists can't say for sure if they're alive. They're written into our DNA, shaping the human saga through mutation and resilience.

We touch hundreds of millions of them every day.

As the novel coronavirus outbreak disrupts global markets and prompts unprecedented containment measures, it is worth asking a very basic question: what, precisely, is a virus? What are they made of? Where did they come from?

And, perhaps most importantly, why are they trying to kill us?

The story of viruses is perhaps best told through mind-bending figures.

According to Curtis Suttle, a virologist at the University of British Columbia, the physical properties of viruses make them hard for us to comprehend.

Their tiny size, for starters. If each virus in a human body grew to the size of a pinhead, the average adult would become 150 kilometres (95 miles) tall.

In a 2018 study, Suttle found more than 800 million viruses settle on each square metre of Earth every single day.

In a tablespoon of seawater there are typically more viruses than there are people in Europe.

"Most of us will swallow more than a billion viruses every time we go swimming," said Suttle. "We are inundated by viruses."

A 2011 paper published in Nature Microbiology estimated that there are 1×10 to the power 31 (more than one quintillion, or 1 followed by 31 zeros) viruses on Earth.

Lay them all end to end and they'd stretch 100 million light years, or 1,000 times the breadth of the Milky Way.

- The virus as concept -

Viruses are best thought of as "molecular packages", according to Teri Shors, professor of biology at the University of Wisconsin Oshkosh and author of several books on the subject.

"These packages have to be small enough to fit inside of a cell to cause infection," she told AFP.

Essentially strings of genetic material contained by a few protein molecules, viruses occupy a strange middle ground between the living and the inert.

Since they don't have cells and do not produce energy through respiration -- a key definition of living organisms -- many scientists don't consider them to be alive.

Yet, as soon as they enter their host, viruses spring into activity in ways rarely seen in nature, hacking cells with new genetic instructions to replicate at dizzying speed.

Ed Rybicki, a virologist at the University of Cape Town, said viruses were "as much a concept as a thing".

"I consider viruses to be alive, because when they are in a cell, they ARE the cell," he told AFP.

"Unless they can enter a warm body and get inside of a cell, viruses are inert," she said.

But once it infects its host, "the entire cellular machinery is entirely devoted to making viral progeny", said Suttle.

"This is the living virus."

While their beginnings are uncertain, viruses have left their imprint on nearly all life on Earth, including humans.

Around eight percent of the human genome is of viral origin -- that is, the remnants of ancient viruses that have infected us, developing species-wide tolerance.

But their story begins aeons before humans.

"We think that viruses were there at the very beginning," said Suttle.

Most viruses come to our attention because they make us sick.

Recent years have seen widespread outbreaks of viral infectious diseases, from the coronavirus epidemic today to SARS in the early 2000s and Ebola in western and central Africa.

But there are virtuous viruses too.

"Nearly all viruses are in fact harmless to humans," said Rybicki.

Indeed, many viruses benefit human health, infecting other organisms that would otherwise do us harm.

Another benefit: the carbon uptake of ocean algae, which helps purify the air we breathe, is greatly accelerated by viruses.

And they have widespread healthcare applications.

Besides vaccines derived from weakened viruses, an emerging area of treatment known as virology is developing new ways to treat chronic diseases such as cancer.

"These viruses replicate in cancer cells but not healthy cells, so this treatment is not as toxic as classic cancer therapies," said Shors.

For Rybicki, who has spent most of his professional life trying to unlock their secrets, the most remarkable thing about viruses is how many more mysteries they still hold.

"They are the most diverse organisms on our planet, and there are more of them than anything else -- and we still know hardly anything about them."