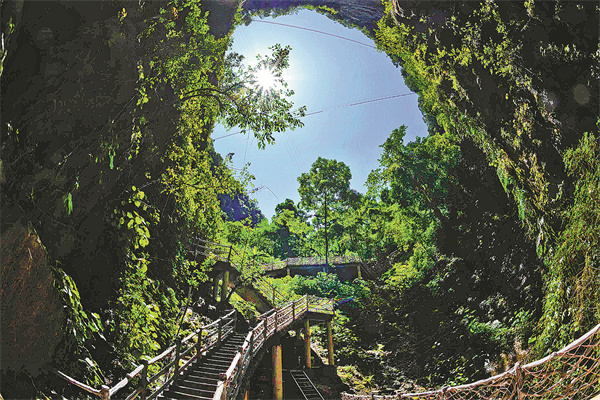 A sinkhole is a huge hole in the ground caused by long-term corrosion by an underground river, and then the collapse of a large area of the land surface. Boasting three of the top 10 sinkhole groups in the world, Guangxi is a well-known karst landform geo-museum, and the Mianhua Sinkhole is the best developed one among the sinkholes in Guangxi.

The Mianhua Sinkhole is about 280 meters deep and 300 meters in diameter, and looks like a giant funnel. The sinkhole, like most others that have been found in recent years, is comparable to a natural reserve where unique and rare species of plants, animals and insects live undisturbed, as the depth of the sinkhole is a natural protection for them from human invasions.

After hundreds of millions of years of development, the sinkholes have become a paradise for different kinds of organisms that have adapted to the mini-ecological and weather systems formed in the sinkholes, just like the unmanned lonely islands in the high seas. So special attention must be paid to protecting the biodiversity of the sinkholes.