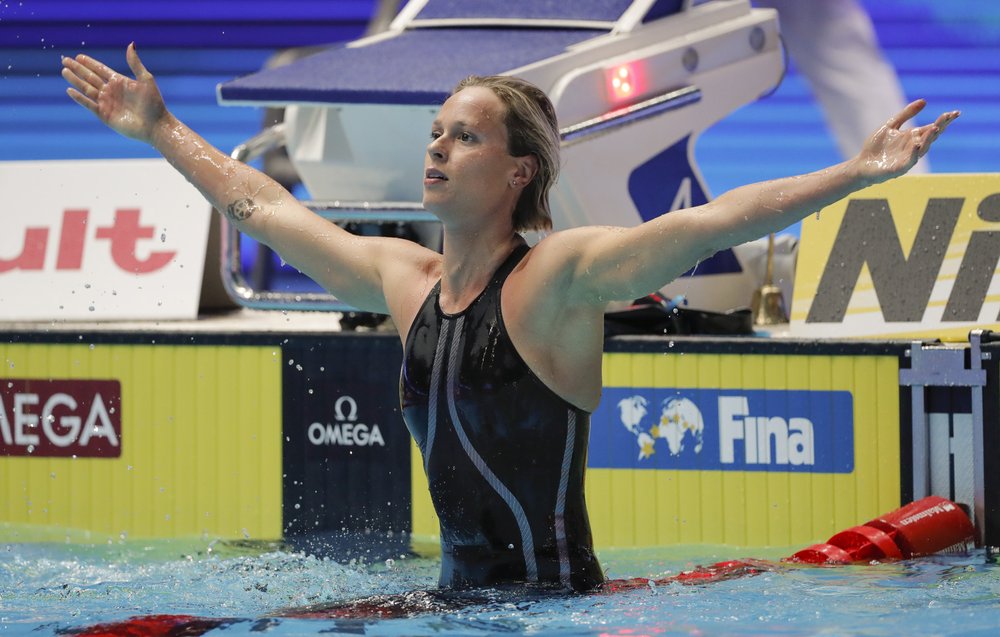 Federica Pellegrini began the countdown to the end of her stellar career in style.

The Italian defeated a field of younger competitors, minus ailing Katie Ledecky, to win the 200-meter freestyle at the world swimming championships on Wednesday night.

Pellegrini, who turns 31 next month, is competing at her final worlds. She’s aiming to make a fifth Olympics in Tokyo next year before retiring.

She overtook 18-year-old Australian Ariarne Titmus down the stretch to earn her fourth career gold — and record eighth consecutive medal — in her signature event. The Italian touched in 1 minute, 54.22 seconds.

Sun Yang was back in the pool but with none of the rancor from the previous night when he was booed and shunned on the medals podium. The Chinese star with a history of doping failed to medal in the 800 free.

Pellegrini joined Katinka Hosszu of Hungary and Sarah Sjostrom of Sweden as the only women to win an event at least four times at worlds.

Pellegrini’s dominant run began in 2005 in Montreal, where she took silver. She earned bronze in 2007 and then won in 2009, setting a world record that still stands from the high-tech suit era, and again in 2011.

She was runner-up in 2013 in Barcelona and in 2015 in Kazan, where Ledecky won, before winning two years ago in Budapest.

Pellegrini worked her way from seventh on the opening lap to fourth and then second before overcoming Titmus with a last time split of 28.90 seconds to the Aussie’s 29.51.

“I am too old for this,” Pellegrini joked.

“She’s a true champion, world record holder,” Titmus said of Pellegrini. “For her to beat me, I’m OK.”

Sjostrom earned bronze in 1:54.78. She received oxygen on the pool deck after the race and later said she had a headache.

Ledecky hasn’t been at the pool since Monday. She withdrew from the 200 free heats and the 1,500 free final on Tuesday with an illness. The American star is being monitored by doctors, but no diagnosis has been disclosed.

While Pellegrini is winding things down, Kristof Milak of Hungary is getting started with a bang.

He broke Michael Phelps’ world record by nearly eight-tenths of a second in winning the 200 butterfly.

“When I turned back and saw the time, all the pressure, all the tension just got off my back and all the joys came out,” Milak said.

Phelps set the mark for the first time in 2001 and no one had taken it from him until Milak.

“It is absolutely fantastic. After that swim I don’t think anybody can go close to him,” fellow Hungarian Laszlo Cseh said.

The 19-year-old swimmer became the first teenager to win a world title in the event since Phelps at age 18 in 2003.

“It’s an amazing feeling,” said Milak, who climbed out of the pool and took two deep bows as the crowd cheered.

Chad le Clos of South Africa was out under world-record pace through the first lap before Milak gained the lead after 150 meters.

“Unbelievable race, really,” said Le Clos, an old rival of Phelps. “Probably one of the greatest races ever.”

Caeleb Dressel swam a blistering butterfly leg to haul the Americans from fourth to first before turning it over to Manuel for the anchor leg. But she couldn’t stave off a charging Campbell.

The crowd clapped along to the Italian national anthem for a second time when Gregorio Paltrinieri won the 800 free in 7:39.27.

Sun was never a factor in the event he’s won three times and finished sixth. He was cheered by fans from his country as he came on deck and waved to the crowd as he walked off.

There was none of the booing that rained down on him a night earlier when Sun won the 200 free after Danas Rapsys of Lithuania finished first and then got disqualified for a false start.

On the medals podium, Sun was shunned by co-bronze medalist Duncan Scott of Britain. Sun told Scott, “You lose, I win” before they walked off. FINA sent warning letters to both swimmers.

“Both competitors had an inadequate behavior on this occasion, which is not acceptable,” FINA said, citing a specific rule in its constitution that the world governing body’s executive board had met to tweak shortly after the confrontation.

Sun also was ignored by silver medalist Mack Horton of Australia on the podium after the Chinese star won the 400 free.

Horton and Scott, along with other swimmers, are angry at FINA for allowing Sun to compete in Gwangju ahead of a September hearing before the Court for Arbitration in Sport. Sun faces allegations of clashing with drug testers and destroying samples at his home last year. He faces a lifetime ban if found guilty.

Peaty cruised to victory in the 50 breaststroke, a non-Olympic event. He won in 26.06 seconds, adding to his 100 breast title.