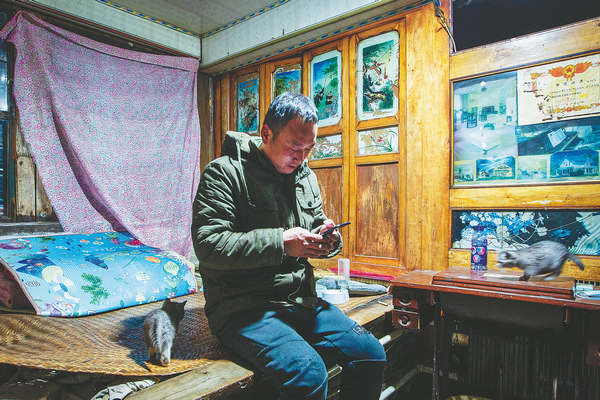 SHENYANG－Whether sleeping on a brick bed, feeding leftovers to dogs and chickens, or rustling up a mishmash for himself on a fire stove, fast-paced clips of "Student Zhang" have racked up 2 million likes on Douyin, a popular short-video app in China.

Zhang is the latest vlogger to start from a one-man operation to become an online sensation. Content creators and influencers like Zhang have cropped up on Chinese social media apps such as Douyin and Kuaishou. Though Zhang is only starting to get more attention, many have used a solid fan base to win sponsorship deals and develop their hobby into a lucrative business.

Zhang says he is self-made and has not received professional training to make catchy videos. His video setup is no more than a smartphone and some tapes.

The man, who wears an old cotton-padded jacket with a rough and reddened face, was once a truck driver and a garage owner.

After several business failures, he chose to go back to his hometown Songshu village in July 2020.He describes the choice as a break from city life and reconciliation for his perennial insomnia problem.

"A lot of the details in my videos come from my childhood memories, not exactly from the countryside now," he says.

Zhang makes the videos in an old house that belonged to his grandfather. The brick house is set aside from rows of modern houses in the village. Most of the villagers now live in houses plated with white glazed tiles on the facades and have running water and underfloor heating.

Inside Zhang's house, furniture and an old DVD player remind people of life in the 1980s and '90s.

Some scenes that may be unfamiliar for urbanites, such as washing clothes in the river, cutting firewood in the mountains and digging cellars, are still common for some elderly people in this village, Zhang says.

The vlogger says he will often invite his friends in the village to appear in the videos. These 30-something men and women could be "drummers" as they beat a bucket with wooden sticks, or be "guitarists" as they pretend to play the cardboard box guitars, showing plenty of joie de vivre in a minimalist lifestyle.

His subscribers say the rural life portrayed in Zhang's videos used to be the reality that many lived through 20 or 30 years ago, creating an "emotional impact". Student Zhang projects not a day in the life, but a life in the past, one comment on Douyin says.

Wang Le, a 45-year-old resident in Dalian city, is a fan of short videos about rural life. He says that everything in Student Zhang's short videos－the frozen vegetable fields in the yard, the piles of straw in the crop fields, and the pine forests on the distant mountains－remind him of the countryside where he grew up. "In a few years I will retire; I would like to return to the countryside to spend my later years," Wang says.

Zhang did not expect his newfound fame would come so soon. Now, his old house has become a "landmark" and many are willing to travel there to see him in person.

Such a viral phenomenon reminds many of Li Ziqi, who shared an idyllic life in the mountain of the southwestern Sichuan province on different platforms at home and abroad. Now, she has over 16 million subscribers on her YouTube channel.

Data released in June by Douyin shows that videos themed on China's rural life had received 12.9 billion likes in the past year, and the total income of these content creators increased by 15 times year-on-year.

"With the urbanization of China's countryside and more people moving into or building cities, rural life has become a dear and cherished memory for many Chinese," says Xie Taiping, a professor with the Southwest University of Political Science and Law.

The 48th "Statistical Report on China's Internet Development Status" shows that by June, the number of internet users in China had exceeded 1 billion, 297 million of whom were from rural areas.

Under the spotlight, Zhang is uncertain but full of expectations about his future. "The countryside is my roots. I hope to use my expertise to help my hometown attract more attention and get more lively," says Zhang.