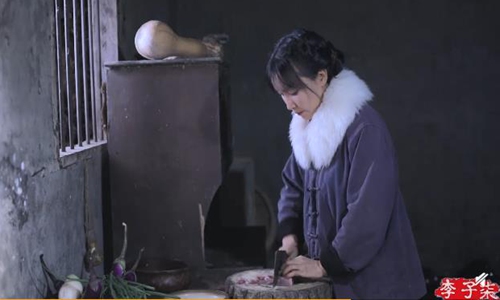 Many fans joined in praising Li Ziqi, a Chinese influencer fond of sharing traditional crafts and cooking ideas for her effective promotion of Chinese culture to the world.

But some Chinese cultural observers stressed that the role of China's official institutions in promoting Chinese culture and facilitating international cultural communication was "irreplaceable."

"Such a creative approach in promoting Chinese culture is laudable, but its impact is not comparable to that of Confucius institutes," said an employee at the Confucius Institute in Barcelona, Spain, surnamed Li.

"The Confucius Institute serves more as a language platform, and its professionalism and influence cannot be replaced."

But Li Ziqi's success can serve as an inspiration for Confucius institutes around the world to find more creative and vivid ways to tell Chinese stories to foreign youngsters, according to Li from the Confucius Institute, suggesting that the official cultural products could be more down-to-earth.

Liang Yanmin, a professor at Beijing Language and Culture University, told the Global Times on Tuesday that governmental institutions still have advantages over private organs or famous individuals as they have more resources, including teaching staff and funding, to promote cooperative programs in foreign countries.

"But official and individual recreational channels are equally important as we [Chinese] need to present good stories about China from multiple dimensions," Liang noted.

On China's Twitter-like Sina Weibo social media platform, a hastag related to the topic "why Li Ziqi wins global popularity" has been viewed for more than 750 million times as of Tuesday.

Some critics emerged arguing that the videos were always filmed in villages and catered to what they characterized as Western stereotypes of a backward China.

"The core of her video is not trivial rural life but the self-sufficient lifestyle of Chinese people," the Communist Youth League said in a post on WeChat on Monday.

"Her videos show the beauty of bucolic life in Chinese rural areas and remind us of an ideal life dreamed of by both Chinese and foreign gentlepersons."

Such videos could "wake up" people in the West against all those reports smearing China and "make them recognize that China is not a dreadful monster but a country with a noble culture and a long history," read the post.