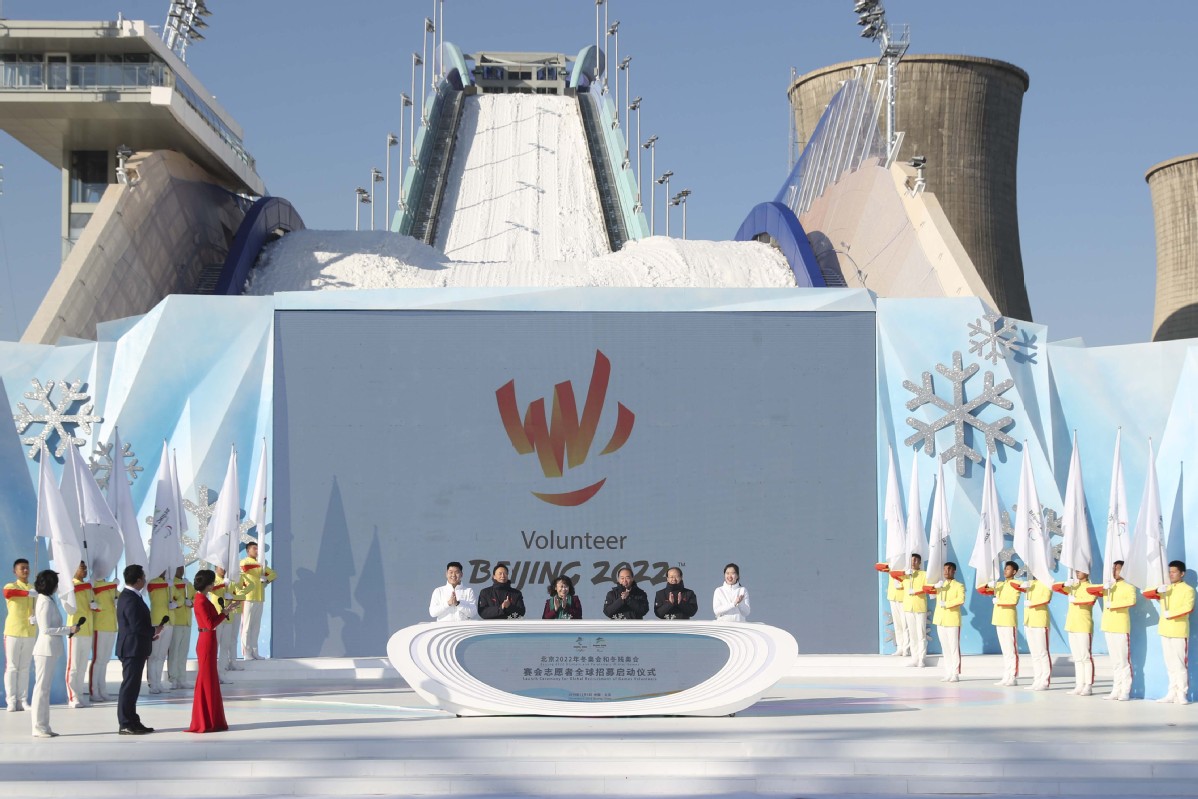 The volunteer logo for the 2022 Winter Olympic Games is unveiled at the launch ceremony in Beijing, Dec 5, 2019. (Photo: chinadaily.com.cn)

Despite winds delivering a deep winter chill, Shougang Industrial Park in western Beijing bustled with warm energy on Thursday with over 1,000 officials, students, guests and performers clapping and singing to launch a global volunteer recruitment drive for the 2022 Winter Olympics.

Through 18 months of selection, testing and training, the call-up is expected to recruit 27,000 volunteers for the 2022 Olympic Winter Games and 12,000 for the following Paralympic Winter Games, both held by Beijing and co-host city Zhangjiakou, in Hebei province.

Joined by student representatives at the ceremony, Beijing's Party Secretary Cai Qi, also president of the Beijing Organizing Committee for the 2022 Olympic and Paralympic Winter Games, opened the online application portal on Thursday vol.beijing2022.cn, coinciding with the United Nations' annual international volunteer day. The website will be available to both domestic and overseas applicants until the sign-up deadline of June 30, 2021.

Successful candidates will be trained to assist organizers in 12 service categories before and during the Games, including international liaison, competition organization, media operations and venue services, in three zones: downtown Beijing, the capital's northwest Yanqing district and Zhangjiakou's Chongli district, according to Beijing 2022 organizers.

In addition to college and high school students from China－the anticipated majority of the 2022 volunteers－Beijing organizers also welcome overseas Chinese and foreign enthusiasts to join the program through authorized partners, including NGOs, volunteer groups abroad and selected embassies and consulates, which will be identified soon via the online platform.

The basic criteria for applicants include obeying Chinese laws, being at least 18 years old by 2022, having a basic command of English, being physically and mentally healthy and willing to serve on a voluntary basis.

Drawing on experience from the 2008 Summer Games, the Chinese capital's recruitment push for 2022 ensures the International Olympic Committee of another successful volunteer campaign, officials said.

"The great success of the volunteer program from the Olympic Games Beijing 2008 still lives on today," IOC President Thomas Bach said in a video message sent to Beijing at the launch on Thursday.

"Building on the strong foundation of this legacy, I have no doubt that the volunteer program for 2022 will generate even more interest for these Games, especially from the young generation."

In 2008, a total of 80,000 Games volunteers served at competition venues and affiliated facilities, while an additional 400,000 city volunteers were stationed at major transport hubs, hotels, malls and scenic spots across the capital.

With the Olympics' return, organizers have embraced preparation for the event as a way to further promote the volunteer spirit in China.

"Not all of the Olympic heroes fly over hurdles, win gold medals on the court or ski down mountains to be the first. Volunteers are true unsung champions who spare no effort to ensure the Games run without a hitch," said Yan Cheng, human resources director for the 2022 Beijing organizing committee.

"With stories of the 2008 Games' volunteers still warming our hearts, we are embracing yet another opportunity with the 2022 Olympics to raise greater awareness of volunteer service in society, which is no doubt inherited from the Olympic legacy," said Yan, who also oversaw work on the 2008 volunteer program.

During Thursday's ceremony, a special logo for 2022 volunteers, depicting a smiling face made by three V's, which designers intended as a symbol of victory, warm hospitality and an open heart, was unveiled along with a theme song, Flaming Snowflakes, which was performed by entertainers, including movie star Jackie Chan, composer Chang Shilei and singer Joey Yung from Hong Kong.