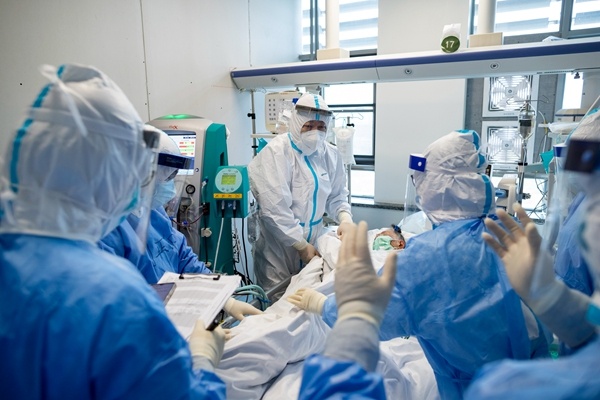 Du Bin (center), director of the critical care department at Peking Union Medical College Hospital, leads a team in checking a COVID-19 patient in Wuhan, Hubei province, in April. Du was working at the Tongji Hospital of Huazhong University of Science& Technology in the city. (Photo: Xinhua)

On Jan 23, when Wuhan, Hubei province, the Chinese city hardest-hit by COVID-19, was locked down to stem the spread of the virus, Peking Union Medical College Hospital issued an open letter to solicit its medical workers to go to Wuhan to provide assistance to local hospitals. In just 18 hours, 3,306 people applied.

On Jan 25, the hospital received an urgent notice from the National Health Commission to organize a national medical team to support Wuhan.

Within 12 hours, the first team of 121 medical workers from six hospitals in Beijing, including 21 from Peking Union Medical College Hospital, arrived in Wuhan, and devoted themselves to the fight against the pandemic.

As an experienced doctor who took part in the fight against SARS-severe acute respiratory syndrome-in 2003, Han Ding, vice-president of Peking Union Medical College Hospital, was one of those who went to aid Wuhan in the first team. He was so busy at first that he could barely grab two hours' sleep every night when he first arrived, according to a report from The Paper.

"He had to do all the communication and coordination work so that the medical service could get started as soon as possible, and he paid a great deal of attention to the safety of team members. There were many difficulties we hadn't been able to imagine, but he applied a hands-on approach and managed the work well," says Xia Ying, Han's colleague.

On Jan 28, just two days after the team reached Wuhan, they restructured a hospital there and prepared the first ward to receive patients with severe conditions. They then changed an ordinary ward area into an ICU area within 48 hours to better treat the patients.

Facing off against the new virus, medical workers quickly went into the wards, risking their lives to save the patients. "When we needed to open the patient's airway, we were actually in close contact with a high concentration of the virus, which was very dangerous, but if we didn't rise to the challenge, who would?" says Han in a report by the Xinhua News Agency.

Their efforts paid off. According to Doctor An Youzhong from Peking University People's Hospital, 90 percent of the patients they received in Wuhan recovered and were discharged from the hospital.

When organizing the second team to aid Wuhan, Han pointed out that, besides medical workers who specialized in respiration and infectious diseases, others who were experts in nephrology, gastroenterology and endocrinology were also needed.

On the evening of March 3, a 47-year-old patient who suffered from both COVID-19 and diabetes suddenly became critically ill. He went into cardiac arrest and many of his organs were in danger of being damaged.

Urgently responding were a group of medical workers from the departments of nephrology, respiration and cardiovascular medicine, as well as surgical ICU. All joined forces to save him with an extra-corporeal membrane oxygenation machine. This oxygenates and pumps the patient's blood in place of the heart. With the machine's operation, the patient's situation got better. When his blood oxygen saturation level reached 100 percent, applause burst out from all of the medical workers.

"Although we had labored for a whole night, the tiredness was swept away when we saw the patient recover," says doctor Chang Zhigang from Beijing Hospital, who led this particular rescue effort in Wuhan.

Besides doctors' efforts, nurses contributed a lot as well. The China-Japan Friendship Hospital sent 104 nurses to aid Hubei, half of whom were born in the 1990s. They had to do all the caring work since the infectious disease prevented patients' family members taking care of them.

For example, they had to turn bedridden patients in severe condition four to five times a day. Since there were many tubes in the patients' bodies that were attached to life support, the nurses had to be extremely careful during the procedure. Sometimes it took five nurses 40 minutes to help turn a patient over. And that was only a small part of their daily work.

As well as saving lives, the medical workers brought the patients enormous comfort. It was the birthday of a 67-year-old patient, surnamed Wang, on Feb 28. Chang and other doctors and nurses on duty went into her room with a cake, on which the sentence, "Although coronavirus is cruel, there is love in the human world", was written. The day before, on a doctor's round, when Wang was asked for her age, she said, "I'm still 66 today, but will be 67 tomorrow", and her words were remembered by the medical workers who then arranged the surprise, according to a report by People's Daily.

Doctor Gao Weibo from Peking University People's Hospital treasures a slip of paper he received from a patient, which says: "When we were in despair, you risked your life saving us, and increased our confidence to combat the illness. Your arrival makes us feel like seeing the sunlight through the dark clouds."