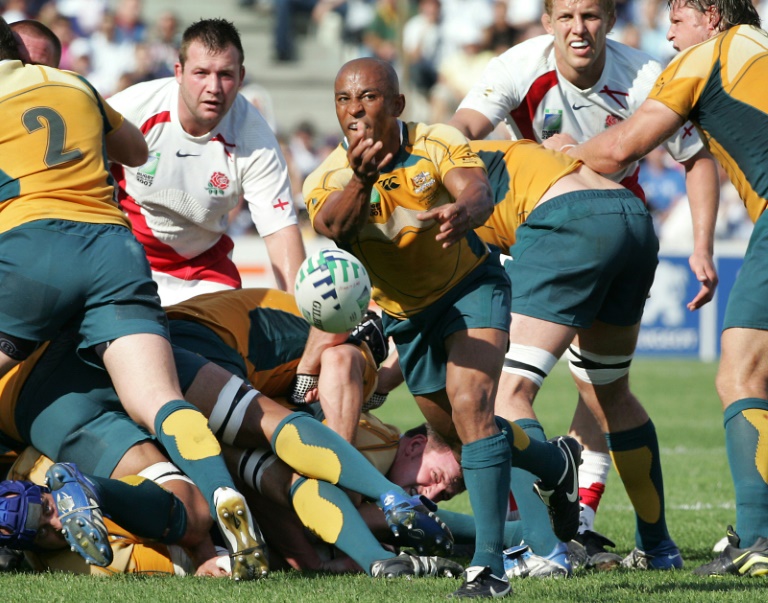 Gregan, Australia's most-capped player, also tipped the Wallabies to break out of their recent slump but thinks Jones can give big-hitting England the edge over treble-chasing New Zealand.

"I actually like the look of England," the World Cup winner told AFP in an interview.

"They will be dangerous because they have the ability to score a lot of points," added Gregan, who played 139 times for the Wallabies, lifting the 1999 World Cup and reaching the 2003 final under Jones.

"Eddie is at the sweet-spot of his coaching career. He will be meticulous and very clear about what they're working towards."

Jones has faced criticism over bone-crushing training sessions that have left players hobbled, notably flanker Sam Jones, who was forced to retire after suffering a horror ankle injury wrestling Maro Itoje at judo.

But Gregan insisted Eddie Jones was the right man to lead England, who broke both their hearts when Jonny Wilkinson slotted a drop goal at the end of extra time to win the 2003 final.

"Eddie is hard but he's very deliberate and he gets results," said Gregan on a visit to Japan.

"Not many champions get there by taking short cuts. Unfortunately you have to hit the hurt locker."

Gregan also revealed a softer side to his prickly former boss, who is renowned for being something of a wind-up merchant.

"You never hear a lot said publicly about how much he cares for his players," he said.

"He's a real father figure to his players. I don't think England have lost a Test match where he hasn't come out and blamed himself."

Gregan pointed to a tough 16-15 loss to the All Blacks at Twickenham last November as evidence that England possess the firepower to win the World Cup.

"They play good blocks of rugby at a very high level but then they drop off," he said, noting England's strong first half in that match.

"A lot of that's between the ears, but they have it in them -- they've got enough big-game players with plenty of experience.

"It's just that ability to absorb pressure and then turn that around, and the All Blacks are still number one in that area."

Gregan warned, meanwhile, that Wales could find life tough at the World Cup after completing the Grand Slam earlier this year.

"Wales are definitely the form team from the northern hemisphere," said the 45-year-old.

"But Ireland were the world rugby team of the year last year -- it's a different animal when you're being hunted, so I don't think Wales are going to go under the radar.

"Beating New Zealand can be done," added Gregan. "The Lions were outstanding in 2017 and what South Africa did last year in Wellington was an amazing performance. It's a very open World Cup -- everyone's beaten everyone."

Australia, drawn in the same pool as Wales and beaten finalists in 2015, need to find consistency, admitted Gregan, after winning just four of 13 Tests last year.

"Last year was a really poor year," he said. "There's a real up and down about how they played. That's the frustration with (head coach) Michael Cheika and the team at the moment.

"But the Wallabies can beat anyone in the world," added Gregan. "The devil's in the detail at the World Cup -- don't slip up on the small stuff because that comes back and literally bites you in the ass."