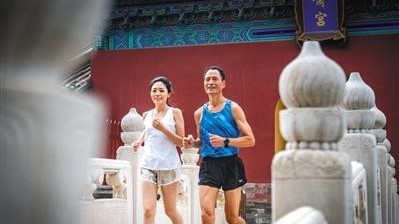 Among the over 30,000 runners for the 2018 Beijing Marathon, 62-year-old Wang Jinfu deserves some attention not just only because he finished last year's event in three hours, two minutes and 11 seconds, but also because it was his 30th consecutive appearance, according to The Beijing News.

Two days before the event, Wang canceled his regular running preparations, which he called the relaxation and storage stage. He also avoided a hot soaking bath which he believes could sap his strength.

Usually, Wang goes to the Temple of Heaven before six in the morning and does some warm-up exercises before joining friends for two rounds of running in the park. Wang will also pick a day every week to finish a half-marathon as long-distance training.

Wang attended Beijing Marathon for the first time in 1989 when women runners participated in the event for the first time. Since then he has never missed the competition though once he could only run in the half-marathon in 2014 because he failed to register for the longer event. Interestingly, that was also the last time the half-marathon was run as part of the event.

Wang watched the first Beijing Marathon in 1981 and that's also when he wondered when he would join the competitors. As a runner who finished 10,000 meters in 37 minutes, Wang felt capable of challenging in the event which, before 1998, had a high standard for registration: Men must have finished a marathon within three hours before they could compete in the one in Beijing.

In his 30 appearances in the Beijing Marathon, Wang has finished five times within three hours.  His time of three hours, two minutes and 11 seconds in 2017 was the best among all Chinese runners of his age.

Wang said that running already became a habit and a part of his life. These days he wants only to enjoy it and does not want to set any goal for himself.