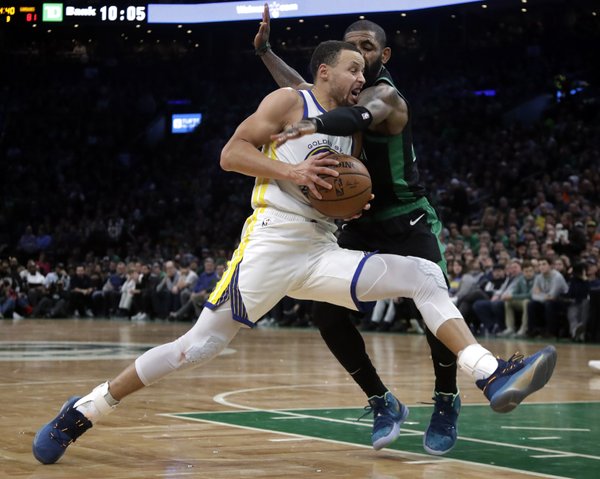 After beating the Lakers without LeBron James and the Wizards without John Wall, the Golden State Warriors were eager to test themselves against a full-strength opponent.

The Boston Celtics were just what they were looking for.

Kevin Durant had 33 points and nine rebounds, Stephen Curry scored 24 points and Klay Thompson had 21, including two key free throws, for Golden State on Saturday night to beat Boston 115-111 and give the Warriors their 10th win in a row.

“We needed this game,” said Steve Kerr, who became the fastest coach in NBA history to 300 victories. “We needed to be challenged and we were challenged big-time and it could have gone either way.”

Kyrie Irving scored 32 points with 10 assists and Al Horford had 22 points and 13 rebounds for Boston, which had won five straight and 10 in a row at home.

In a game that featured 21 lead changes, the Warriors went ahead 113-111 with 47 seconds left on Thompson’s only free throws of the game and held on as Boston had three chances to tie it or take the lead. Marcus Smart rimmed out on a 3-pointer, Irving airballed a fadeaway from the baseline and Marcus Morris was short on a 3.

Draymond Green missed two free throws, but he got his own rebound and then Curry made a pair of foul shots with 6.2 seconds left to ice it.

“I guess it’s just good for us to come in here and grind out a ‘W,’” Durant said. “We’ll forget about it in the morning, but for tonight everybody felt good coming in here, knowing we haven’t played with this type of intensity in a long time, especially on the road. It was good to feel that. We know that this is different than any other type game, especially with what this team is building.”

The matchup of the two-time defending NBA champions and one of the top contenders in the Eastern Conference had a sold-out TD Garden standing for the final two minutes. The crowd included several New England Patriots on the eve of their departure for the Super Bowl, including owner Bob Kraft and twin defensive backs Jason and Devin McCourty.

“Two great teams going at it,” Curry said. “We bring the best out of each other.”

Curry was scoreless in the first quarter, but hit five 3-pointers in five minutes in the second to help Golden State open a 56-47 lead. The Celtics scored the next 10 points to erase it.

Asked about Curry not being “too active” the rest of the game, Celtics coach Brad Stevens said: “The second-quarter spurt that he went on really hurt us.”

“You know, I wish we were all ‘inactive’ on our 24-point games,” Stevens said. “We let our guard down even for a split-second and they made us pay all night.”

Kerr, whose team was playing the fourth of five straight road games, was prepared for the struggle of playing at the TD Garden on a Saturday night against a Celtics team that hadn’t lost at home in more than a month.

“It’s a tough place to play, and an 8:30 start, which means an extra hour of beer time for the local Bostonians,” Kerr said before the start. “So probably going to be a little loud in there tonight.”

Warriors: Kerr needed 377 games to reach 300 wins. Pat Riley needed 416. ... Durant dribbled out the clock at the end of the first quarter and then, after the buzzer, sank a half-court shot that didn’t count. ... It’s the third time in five seasons the Warriors have ended an opponent’s 10-game home winning streak. They snapped San Antonio’s 48-game streak in 2016 and a 13-game streak for Cleveland in 2018.... DeMarcus Cousins picked up his fourth foul early in the third and his fifth about three minutes into the second half. He played just 24 minutes but had 15 points and eight rebounds.

Celtics: Irving had his 11th double-double with points and assists. The last Celtic with 11 of that kind of double-double was Larry Bird in 1986-87. ... Irving has six straight games of at least 25 points, matching the longest such streak in his career.