Water Cube to serve as both swimming pool and ice rink 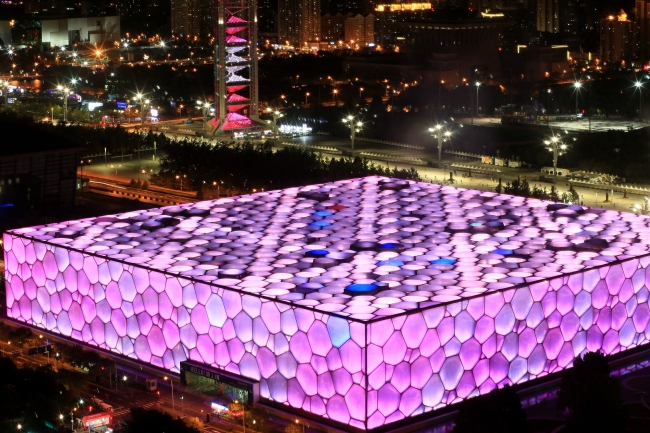 The 2008 Beijing Olympic Games' icon venue-Water Cube, has transformed into "Ice Cube", which is the world's first Winter Olympic Stadium to create curling ice in a swimming pool.

In the Olympic and Paralympic Winter Games, "Water Cube" is set to serve as the curling venue.

The construction of the convertible structure of the Water Cube was completed on Tuesday.

Following on from the completion of the major construction, the Water Cube will now finish the renovation of sports lighting, ice-making, and air-conditioning systems in the curling competition venues in October, and will hold the China Youth Curling Championship in December to debut.

With the convertible structure of the ice rink and the removable ice-making system, the venue in the future will have both water and ice functions.

After the ice-making equipment and ice layer are removed, the ice rink can be reduced to a swimming pool.

According to the plan, water sports will take place in spring, summer, and autumn, and ice sports will happen during winter.

After the renovation, the venue will receive an intelligent system upgrade as well. The new intelligence system will effectively monitor the changes in the thermal, humid and lighting environment in the competition hall.

It will ensure that under any heat load conditions, the arena can react to changes and provide dynamic heating throughout the indoor environment. For example, when the ice surface temperature of curling track reaches minus 8.5 C, the temperature above 1.5 m of ice surface remains at 10 C, the relative humidity does not exceed 30%, and the temperature in the stands is 16 C to 18 C.

The Water Cube has also carried out a research project on architectural acoustics of the curling hall, in which the most advanced building sound-absorbing materials will be used. Athletes who are more than 40 meters apart at both ends of the track can communicate clearly through shouting.

Underground in the South Square of the Water Cube, the Ice Cube ice sports center is under construction at the same time and is estimated to begin trial operation next May.

The Ice Cube ice sports center will not only provide a competition guarantee for the Olympic and Paralympic Winter Games but also is expected to be used by 100,000 ice sports enthusiasts after the Games.