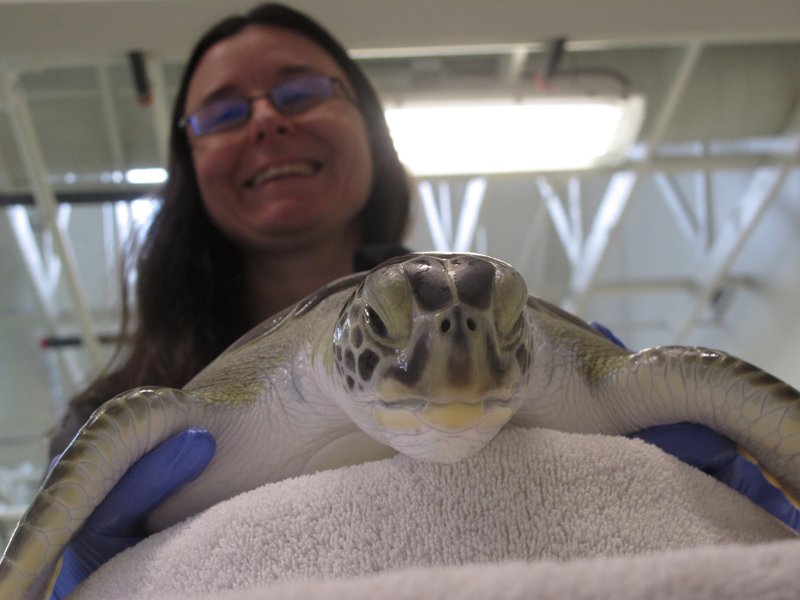 In this Feb. 27, 2020 photo, Brandi Biehl, co-director of the Sea Turtle Recovery hospital inside the Turtle Back Zoo in West Orange, N.J. examines a sea turtle. (Photo: AP)

A dozen sea turtles that nearly froze when they were too far north last fall as water temperatures abruptly plunged in New Jersey survived that ordeal but remain threatened by the pneumonia most of them developed afterward.

Sea Turtle Recovery, a nonprofit group operating out of the Turtle Back Zoo in northern New Jersey, got the turtles through their initial medical crisis, with two needing CPR.

But 11 of them went on to develop pneumonia, a common problem in turtles that survive so-called “cold-stunning” and one that could yet kill some of them. Bill Deerr and Brandi Biehl, who run the center, are determined not to let that happen.

“Their whole organ systems started to shut down due to the cold,” Deerr said. “It’s really their fight at that point. If they make it through that first month, it’s almost like they’ve decided they want to fight and to live.”

The turtles are being treated with medications, and their progress and conditions are checked daily in a hospital on the grounds of the turtle-themed zoo that is popular with children.

Ten of the 12 are green turtles, along with one loggerhead, and one endangered Kemp’s Ridley turtle. The loggerhead, the largest of the group, was found floundering off Ocean City, New Jersey; the others were recovered from the bayside beaches of Long Beach Island in November.

Biehl and Deerr suspect climate change played a role in their becoming ill.

One of the turtles in the worst shape was a 4-year-old green turtle they named Duckie. They injected him with drugs to jump-start his heart and put a breathing tube down his throat. It was touch-and-go for about 15 minutes.

“All of a sudden he opened his eyes, lifted his head and took a breath,” Deerr said.

The largest turtle is Tabitha, a 20-year-old loggerhead found flailing in the surf, covered with 15 pounds of barnacles, some of which had broken through her shell to bone underneath it.

She also could not dive because of air in her body cavity, and had pneumonia, severe anemia and an intestinal blockage. Center staff removed 2 1/2 gallons (9 1/2 liters) of air from her body and began treating her many ailments. They are optimistic she will make a full recovery and eventually grow from 165 pounds (75 kilograms) to about 250 (115 kilograms).

Not every sick turtle survives; two have died at the center within the last year. And two of the sick turtles have fungal pneumonia, a more serious form of the illness. But the center has rehabilitated and set free 41 turtles since Dec. 2016.

“When they first come in, it’s their will to live,” Biehl said. “It’s their fight. We’re doing all we can. Their drive to live is absolutely incredible.”