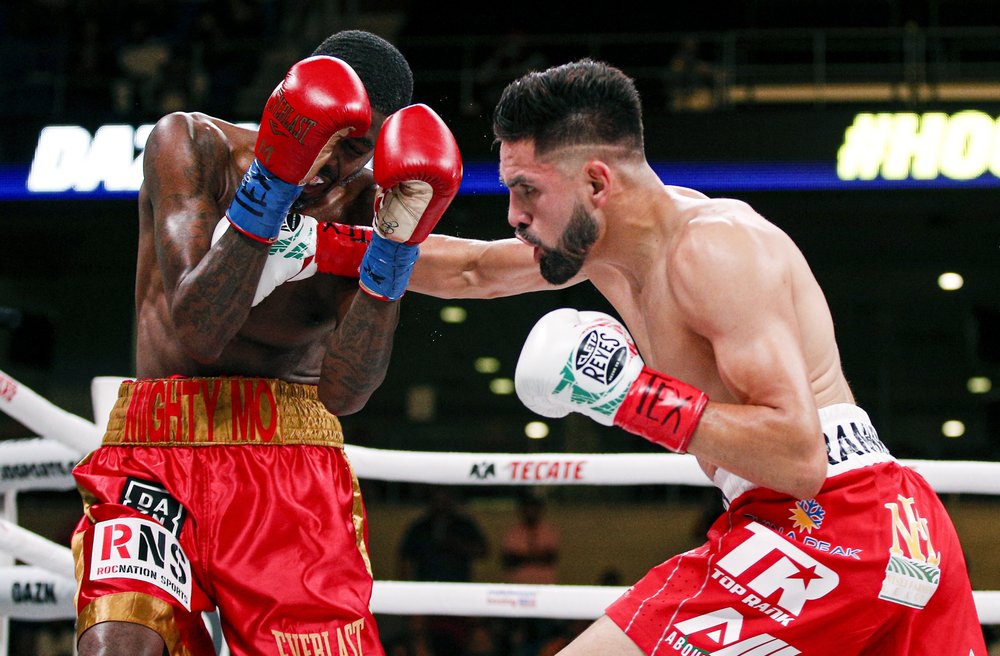 Jose Ramirez, right, lands a punch on Maurice Hooker in the second round of a boxing match, Saturday, July 27, 2019, in Arlington, Texas. Ramirez won in the sixth round with a TKO. (Photo: AP)

Ramirez delivered a series of brutal punches, pinning hometown favorite against the ropes in the sixth round before referee Mark Nelson stepped in and stopped the scheduled 12-round bout.

“He didn’t know how hard I hit until the moment came,” Ramirez said.

Two lefts to the head knocked Hooker into the ropes. The WBC champion kept punching until Nelson ended the fight. Hooker said he lost his focus for just a split second.

It was the third title defense for Ramirez, the 2012 Olympian who improved to 25-0 as a pro with his 17th knockout. His first two title defenses came at home in California.

“I came here with one mission, just to do my fight,” Ramirez said. “Going back to my rhythm and nice jab, everything I did when I was an amateur.”

Bob Arum, who promotes Ramirez, described the boxer as a “real American story” — the U.S.-born son of parents who entered the country illegally from Mexico but are now U.S. citizens. He trumpeted Ramirez’s work for immigration rights and took a swipe at President Donald Trump.

“He’s a standout person for immigration rights,” Arum said of the boxer. “For what’s happening in this country with the attitude of the guy in charge toward immigrants, it’s an absolute disgrace.”

Hooker dropped to 26-1. It was his third title defense, the first at home for the 29-year-old from Dallas known as “Mighty Mo.”

“I’m still in shock a little bit,” Ramirez said. “I didn’t go after a vacant title. I went after a guy who is a world champion, a humble champion.”

Ramirez, who took the vacant WBC title in the 140-pound division in March 2018, had some blows in the opening round that sent Hooker stumbling into the ropes. He stayed up then, but Hooker did go down soon after that after taking a counterpunch and being unable to keep his balance when Ramirez was standing on his foot.

Both fighters landed solid blows in the second round, but Ramirez again had Hooker against the ropes. When the ref stepped in between them at the end of the round, Hooker had a smile on his face and was talking toward his opponent while going to the corner.

The third and fourth rounds both ended with the fighters exchanging punches and having to be separated by the referee when the bell rung.

“I feel like I beat myself,” said Hooker, who felt like he was getting back into the fight before the ending flurry. “It’s going to haunt me.”

Before the main event, there was a memorial 10 count of the bell for 1984 Olympic gold medalist and four-division champion Pernell “Sweet Pea” Whitaker and two fighters who died this week after bouts last weekend.

Whitaker died earlier this month after being hit by a car in Virginia. He was 55.

Both title fights on the undercard went the distance and ended with unanimous decisions.

Tevin Farmer defended his IBF world super featherweight title for the fourth time in less than a year in 12 rounds against over mandatory challenger Guillaume Frenois. Tramaine Williams beat Yenifel Vicente in a 10-rounder for the vacant USBA super bantamweight title.

Farmer took the vacant IBF title last August, and is 30-4-1 after the matchup of southpaws. Frenois, who is from France, lost for only the second time in 49 pro fights (46-2-1).

Williams, the 122-pound “Mighty Midget” from Connecticut, overcame a couple of low blows that deducted points from Vicente. There was a lengthy pause after one such shot in the middle of the seventh round, but Williams rebounded with a flurry of punches and went on to improve to 19-0. Vicente dropped to 35-4-2.