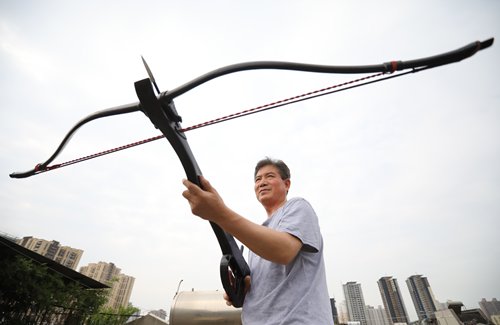 Mao Naimin, a resident in Xi'an, Northwest China's Shaanxi Province, shows a homemade replica of the ancient crossbow of Qin Dynasty (221-206 BC) on the rooftop of his apartment. (Photo: IC)

The idea of making weapons from the Qin Dynasty (221BC-206BC) jumped into Mao Naimin's head 25 years ago.He has not stopped since then.Now, the 65-year-old man owns a small studio at the top of an apartment building in Xi'an, Northwest China's Shaanxi Province. Xi'an is 25 kilometers away from Xianyang, Qin's capital.Twenty-five years ago, Mao was a businessman. One day, he took his son to the Dayan Pagoda and visited a craft shop."Daddy, look how beautiful the sword is," the boy said, pointing at the wall. Mao checked the sword his son was pointing to and saw it was used for opera and performance.At that very moment, Mao thought he could restore Qin weaponry and make a business out of it.Mao began immediately, but it was very difficult for him, as he did not have any knowledge of the craft or cultural relics.From 1994 to 2004, Mao spent 10 years collecting and researching information on weapons and visited a number of archaeological experts.In 2004, he built a small studio and bought some machines and devices. He then began restoring Qin weaponry.The first Qin weapon he made was a bronze sword unearthed from the tomb of Qin Shi Huang, the first emperor of unified China. The sword belonged to the driver of a horse-drawn chariot."The appearance and size were easy to make, but it was a long and hard process to make the texture the same as the original," Mao said, talking about his first sword. In 2008, Mao managed to complete his first Qin bronze sword replica. "Apart from melting the alloy, it was all home made," he said.Mao has also made a powerful Qin crossbow replica. "A bow could shoot 70 meters, but crossbow could shoot an arrow 200 to 300 meters," he said.Since 2008, he has completed making many Qin weapons, including a shield, bow and crossbow.But in the end, he decided not to make it a business. He said that he gradually had a deeper understanding of Chinese traditional culture through making ancient weapons. "My appreciation of the weaponry has turned into awe and enthusiasm," he said.His home is filled with half-completed Qin weapons and tools. He has spent 1 million yuan ($144,000) on making ancient weaponry. Many people do not understand him, but Mao said his son supports him.Mao hopes to open a museum on ancient weaponry and showcase them to modern society.