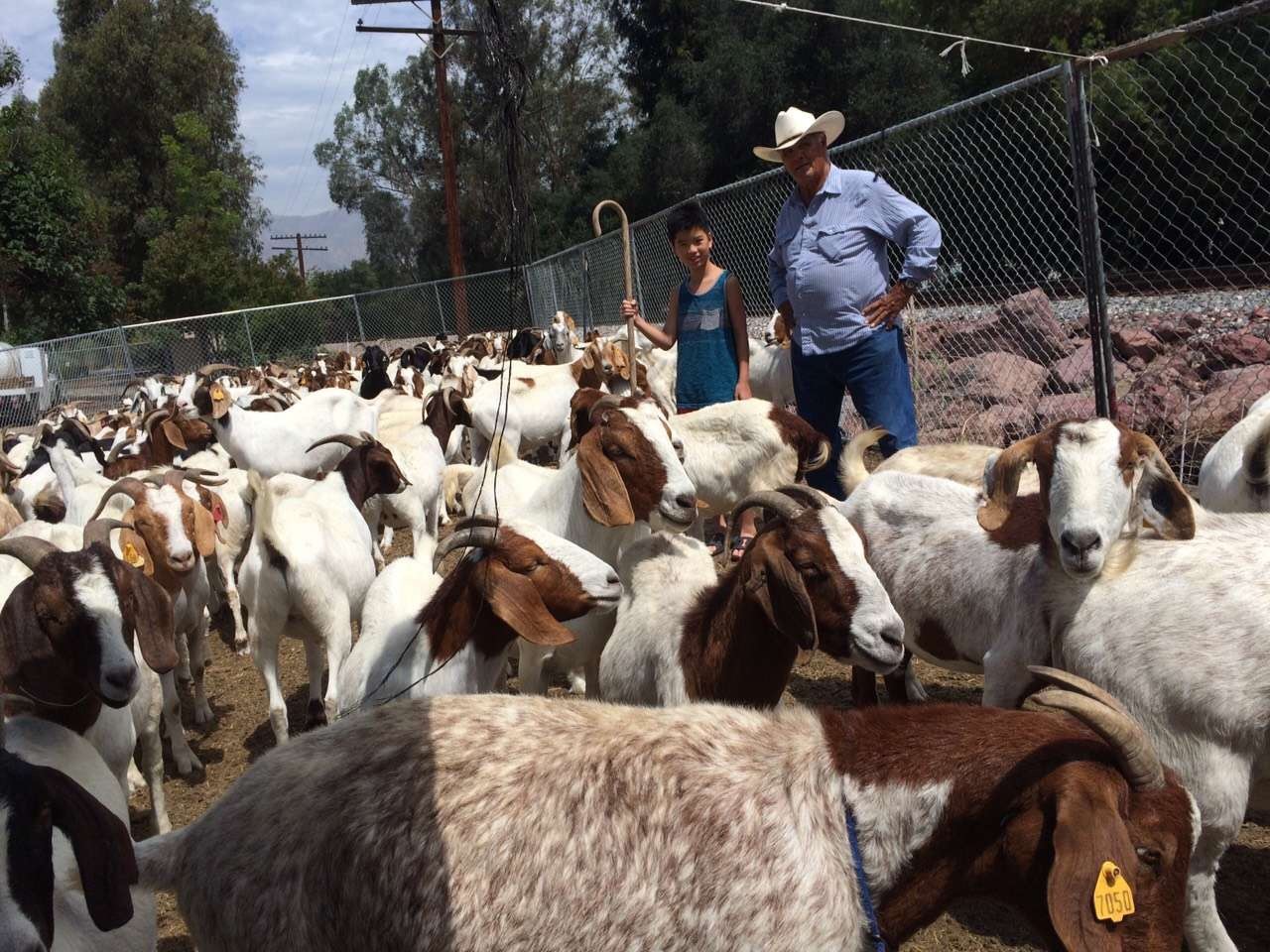 Glendora, a small town on the edge of the San Gabriel Valley, sits roughly 30 miles east of Downtown Los Angeles. Although it’s not a traditional Chinese community, the tranquil setting and reputable schools have attracted more Chinese residents.

"If I hadn't seen so many goats on the hillside in my backyard, I would have never thought of ‘goat weeding," said Li, whose family moved to the small town from South Pasadena earlier this year.

For Li, his favorite feature of his new home is the backyard, a hillside that stretches almost three acres.

Shortly after Li family moved in, they encountered a serious problem. The local fire department requires homeowners to keep their yards free of weeds as a safety measure aimed at reducing fire hazards. Due to the size of Li’s backyard, weed abatement would cost him $1,000 every year.

One day, Li noticed a sheep herd on a hillside next to his backyard. The sheep belonged to George, a Mexican immigrant who lived in San Bernardino County.

As George explained, he first arrived in Los Angeles 15 years ago from Mexico. Due to a leg disability, he was unable to leave home for several years.

Today, George’s herd has grown to 400 “working” goats that service the land for three seasons every year and take winters off. In addition to fulfilling government contract obligations, his goats are available to service private land. George’s goat herd generates almost $3,000 a month on average.

“For me, it’s a life in paradise,” George said.

The first time Li noticed the goats next to his backyard, he was surprised. He then discovered they were contracted by the county to remove weeds from government-owned land.

"So many goats grazing is quite a scene," he said.

Li asked George if the herd could help weed his backyard. They reached a deal whereby 400 goats would clear the weeds off of his property for 500 dollars.

"Using the herd looks simple, but there’s a lot of work to do before and after," said George.

First, hundreds of goats are delivered to the site in a trailer almost as long as a train compartment.

The herd works for several consecutive days, so temporary shelter must be provided so they can stay overnight. To protect the goats from theft and coyote attacks, the shelter must be taller than a human and equipped with a grid.

Many residents hire the goats to remove their weeds as it’s a labor-intensive job made even more difficult by the rough terrain and steep backyard slopes, said George.

Moreover, coyotes often appear near along the slopes and hills. Before they can start work, the goats must be surrounded by the grid to remain protected.

Two sheepdogs play an important role in the herd weeding process. The dogs guide the goats to the grazing sites in the morning and the back to the sheepfold in the evening.

The dogs can also rescue lost goats just as well as any well-trained supervisor.

Low cost of the herd weeding

In June and July, during fire season, California’s residents, especially those living in mountainous regions, receive notifications from the local government to remove weeds from their property.

"I used to pay at least $900 to weed every summer,” said Lin, a Walnut resident.

It is hard to cut the one acre and nearly 40-degree slope in his backyard. Sometimes he cannot find anyone willing to do it, regardless of money.

Last summer, for the first time, Lin paid $700 so the goats could weed his entire slope. It turned out to be cheaper and more effective than anything manual mowing had to offer.

Today, only a few pastures raise goats specifically used for weeding purposes in Southern California. During the summer and autumn seasons, the herds are unable to meet the overwhelming demand.

Li jokingly said another problem with goat weeding is, “individuals have different work attitudes and abilities.”

He also noticed that although the goat herd ate up the grass on the hill, the animals were still "absolutely incomparable to machinery.”