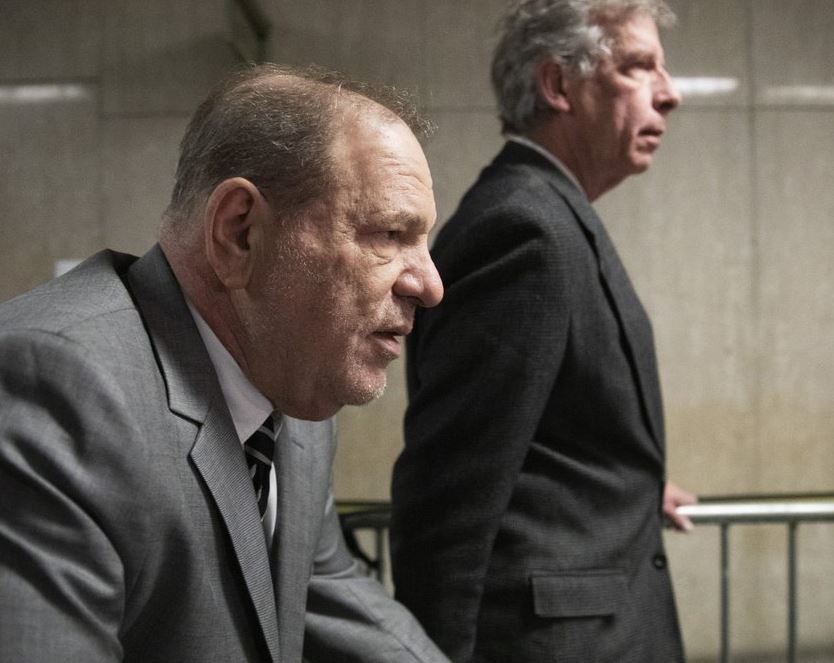 Harvey Weinstein arrives at court for his trial on charges of rape and sexual assault, Friday, Jan. 31, 2020 in New York. (Photo: AP)

A key accuser in Harvey Weinstein’s rape trial testified Friday that he made a series of unwelcome advances, once trying to kiss her as she tried to fight him off, then telling her she couldn’t leave “until I do something for you.”

That “something” turned out to be performing oral sex on her, she told jurors, her voice breaking.

After she faked an orgasm “to get out of it,” she said, Weinstein asked her whether she’d liked it.

“I was nervous so I told him, ‘The best I ever had,’” she said, adding that she dashed out of the room as soon as she could.

The 34-year-old woman has accused Weinstein of raping her in 2013, the most serious allegation in the case against the former Hollywood tycoon who became one of the #MeToo movement’s top targets.

Her testimony, which began with earlier alleged encounters, marked a pivotal moment for both sides in the courtroom.

Prosecutors hoped to hammer home charges at the heart of the case. Weinstein’s lawyers planned to raise doubts about the accuser’s credibility by seizing on her complicated history with the former film producer, including continued interactions and warm emails she sent him.

He is charged with raping the woman who testified Friday and with sexually assaulting Mimi Haleyi, a former “Project Runway” production assistant, in 2006. A conviction could put him behind bars for the rest of his life.

The Associated Press has a policy of not publishing the names of sexual assault accusers without their consent. It is withholding the rape accuser’s name because it isn’t clear if she wishes to be identified publicly.

The woman testified she moved from Washington state to Los Angeles to pursue acting and met Weinstein a party in late 2012 or early 2013.

The producer behind such Oscar-winning films as “Shakespeare in Love” and “Pulp Fiction” offered to help with her acting aspirations, she said, asking her to meet him at a Sunset Boulevard book store to learn about movie-business history.

It was like being with “the guru of Hollywood,” she said. “I thought it was a blessing.”

Weinstein was polite, though he “made grunting noises” when he looked at her, she said.

After a subsequent dinner at a restaurant with Weinstein and one of his assistants, he asked her to meet him at the Peninsula Hotel in Los Angeles for what she thought was a professional meeting.

“It started out very normal,” with him asking her questions about her family, until a stranger interrupted them and Weinstein announced they would head upstairs, she told jurors. She said she didn’t want to go but figured Weinstein just wanted to avoid public attention, and she “didn’t think anything bad was going to happen.”

Inside his suite, he started to undress and offered to give her a massage, she said. When she refused, she said, he pressured her into giving him one on the bed with his shirt off, though she told him she was “not sexual or comfortable with this with someone I don’t know.”

Another time, Weinstein invited her and a friend to a bar at a different hotel, told them he wanted to cast them in a vampire film and invited them up to a room to give them a script, the woman said.

“Oh, no. I know what that means,’’ she told him, according to her testimony. “And he laughed at me and said, ‘I am a harmless old man.’”

In a suite, Weinstein started undressing, went into a bedroom and called for her. When she went to find out what he wanted, he grabbed her arm, closed the door and started “trying to kiss me like crazy,” she said.

She said she tussled with him, and he grew increasingly angry and said: “I’m not letting you leave until I do something for you.”

Then, she said, “he told me to sit on the bed and he went down on me.”

The woman has not yet testified about the alleged rape in a New York City hotel room in March 2013.

Weinstein’s lawyers say the woman later sent him warm — even flirtatious — emails that said things like “Miss you, big guy,” and no one “understands me quite like you.” The defense says the messages point to a consensual relationship.

Not once, in more than 400 messages between the two, did the woman accuse Weinstein of harming her, his lawyers have said.

Prosecutor Meghan Hast told jurors in an opening statement last week that the alleged rape victim had “buried her trauma” and was trying to navigate Weinstein’s powerful grip on her by pretending she wanted to see him and saying nice things.