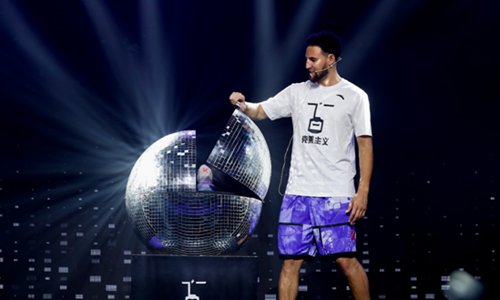 Golden State Warriors' star shooter Klay Thompson said it will take "patience and hard work" to recover fully from his torn anterior cruciate ligament (ACL).
"The recovery is going great. I'm working very hard every day, getting back to having a schedule," Thompson told Chinese reporters when he visited Shanghai this weekend.
"It takes patience and hard work, ­simple, but it takes time."
Thompson, who tore his ACL in the deciding Game 6 of the 2019 NBA ­Finals against the Toronto Raptors, had to skip his national team's World Cup campaign.
The lackluster USA team have qualified for the quarterfinals and Thompson said the team will face huge challenges before they can lift the winners' trophy.
"I think they will win, but I don't think it will be easy," Thompson said. "The world teams are very good. But I think ultimately the American team will prevail."
Despite the injury sidelining Thompson for months, the Warriors have signed him up to a five-year, $190 million maximum contract, US media reported last month.
Some say that the Warriors' NBA dominance over the last five seasons, which saw them winning three NBA championships in five Finals appearances, has made the team an enemy of the league.
"There's only one winner every year, so 29 teams will fail. You have to be very cautious, not letting emotion take over," said the 29-year-old shooting guard, who was in Shanghai to unveil his new ­basketball shoe for the season with his Chinese sportswear sponsor on Friday.
It was important for an athlete to play passionately - but with good manners - Thompson believed.
"You want to play with as much passion as you can," he said.
"Don't let the emotion control you. It's a hard balance and it takes years to perfect, but you have to give yourself room to fail."