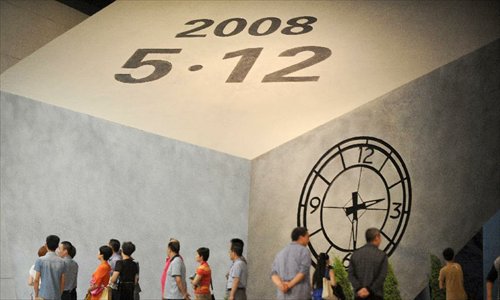 People visit the Wenchuan Earthquake Memorial Museum in the town of Qushan, Beichuan Qiang Autonomous County, southwest China's Sichuan Province, May 9, 2013. The museum was officially opened to the public for free on Thursday to commemorate the fifth anniversary of the Wenchuan earthquake, which hit Sichuan on May 12, 2008. (Photo: Xinhua)

When the clock struck 2:28:04 pm on Tuesday, it marked the 12th anniversary of the devastating Wenchuan earthquake in Southwest China's Sichuan Province. But the national spirit of helping each other in times of crisis didn't fade with time - it resurged during the nationwide fight against COVID-19.

When the magnitude-8 earthquake hit the small county in 2008, it claimed 70,000 lives, left 18,000 people missing and injured more than 370,000 others. But China staged a realistic portrayal of national cohesion - people in every field mobilized all their resources for the rescue mission and offered helping hands to their compatriots.

The cohesion displayed by every Chinese national once again propped up the nation as it stayed strong in the 2020 COVID-19 epidemic. More than 42,000 medical staff from across the nation, setting their own lives and health aside, rushed to help hard-hit Central China's Hubei Province.

Individuals and companies gave what they had to front-line workers, and 11 million people in Wuhan made huge sacrifices under the decisive city lockdown that effectively cut off the spread of the virus.

Facing the deadly coronavirus, doctors, nurses and ordinary people from Sichuan sent their gratitude and personal strength to hospitals in Hubei to combat the virus, in hope of repaying the love and care they received 12 years ago from their compatriots.

Long Xu, a Tibetan from Mianyang, Sichuan just finished his 14-day quarantine on Monday. Long has been in Wuhan for four months as a volunteer. He has contributed his fair share in makeshift hospitals, Leishenshan Hospital, nursing houses and communities in the city.

"In 2008, I saw many volunteers flock to my hometown to help after the devastating earthquake. I saw one volunteer carrying a box of food running in the mud barefoot. This is something I will never forget, and this time I want to do it for Wuhan," said Long.

"An individual alone is nothing in face of a catastrophe like this, but it is the power of solidarity that gives us courage to face it," said Long.

"The 12th anniversary of Wenchuan earthquake" became a hot topic on China's Twitter-like Sina Weibo with millions of netizens sending their blessings to the traumatized province and the country.

Some people who experienced the quake also shared their stories of shaking the trauma off and moving on with the help of others.

A country that can dispatch more than 100,000 soldiers to carry out rescue work after an earthquake, where the prime minister rushed to the disaster site within two hours, where so many people went to donate blood that it even caused traffic jams, will never be crushed, some Chinese netizens said.

The strong national cohesion not only represents a Chinese spirit of solidarity, a cultural bond that was inherited over thousands of years, but also draws on China's development accumulated over the course of reform and opening-up, said Zhang Yiwu, a Peking University professor.

Such mobilization and disaster-relief capabilities cannot be separated from China's infrastructure construction, robust economy and training of medical and social forces, analysts said.

The tremendous disaster that came in the blink of an eye also spurred scientists' continuous efforts in earthquake prevention and disaster mitigation. In 2020, the whole of Sichuan Province will be covered by an earthquake warning system, the Sichuan Earthquake Administration said on Tuesday.

Sichuan each year conducts more than 10,000 emergency drills. It has built 189 warehouses for disaster relief supplies and 1,200 earthquake emergency shelters. There are more than 20 professional rescue teams and nearly 60,000 volunteers on call.