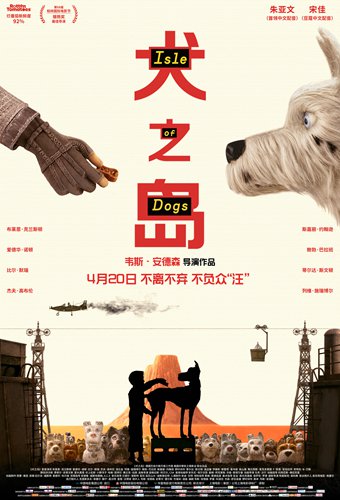 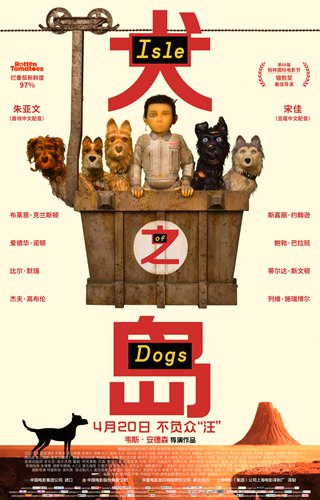 Wes Anderson's stop-motion animated film Isle of Dogs debuted in Chinese mainland on Friday - the first time that any of The Great Budapest Hotel director's works have been shown in mainland theaters.

Set in future Japan, the story about a 12-year-old boy's journey to save his dog after cat-loving authorities exile all dogs to a garbage island premiered to a lukewarm 26 million yuan ($4.1 million) at the weekend box office, but the film still has a chance to turn the tide with good word of mouth. "I was really amazed by the film… so exquisitely beautiful and imaginative… I would say it has a chance at winning the best animated feature award at next year's Oscars!" wrote well-known Chinese film critic Anye Qishi (Darknight Knight) on Sina Weibo."I super, super love Isle of Dogs as it's so lovely and moving and full of surprises," wrote Sina Weibo user ZaoDao. "Every detail is beautiful and fun… I'm going to watch it for a second time!"Currently holding an 8.6/10 rating on Chinese review platform Douban, the film's pre-screenings during the 8th Beijing International Film Festival last week were among the hottest tickets in town. Within seconds of tickets selling out, fans who failed to grab tickets took to social media platforms to voice their frustration.It's clear that Anderson is becoming a well-known name in the Chinese market.Honoring Japanese filmThe US director rose to fame in China with his 2014 Oscar-winning film The Grand Budapest Hotel, which didn't screen in theaters but came to major streaming platforms, where it quickly gained in popularity for its stylish cinematography."I don't think about having my own style at all, but I know people seeing my films often say 'I can tell immediately this is one of your films,'" Anderson told the Global Times via a video call."But I don't mind it really, each movie is a completely new adventure," he noted.Responding to recent discussions overseas about the appropriateness of a US director using Japanese culture in the movie, Anderson said the choice to do so was born out a desire he and his team have had to make a film that pays tribute to Japanese cinema and masters like Akira Kurosawa and Miyazaki Hayao."The story could have been told in any country," said Anderson. "At first, we started with a group of dogs on an island, but we didn't know how they get there, why they are there. When we set it in Japan, we got more inspiration."Growing demand for pet filmsWhile cultural appropriation may be a concern overseas, most Chinese audiences' attention seems to be focused on the fluffy friends in the film."I think anyone who loves dogs will love this film," Zhou Danping, a Beijing-based pet owner of a 10-year-old Labrador and a 9-year-old British shorthair, told the Global Times, going on to say that as a pet owner she is very interested in films starring cats and dogs.  "Especially when the cat or dog in the story is the same breed as one of my pets," she noted, recalling how she was moved to tears by Find My Way Home, a Chinese production featuring a baby Labrador that debuted in February."I know the story was cliché but I just couldn't help watching the trailers again and again before watching the film," Zhou explained.China is now home to over 100 million pets, a nearly 2,000 percent increase over 2008, according to media reports. Of these, about 80 percent are cats and dogs. For cat or dog lovers who do not have a pet, watching short videos of these animals online via apps like Douyin is becoming increasingly popular. The activity has even earned the nickname "cloud cat- (or dog-) sniffing." About 50 percent of the Chinese pet-owning families spend about 1,000 to 5,000 yuan annually on their pets, while the total revenue of China's pet market reached 15 billion yuan in 2015, according to a report from Guangzhou-based Xinkuaibao newspaper.The film market also seems to be responding to this trend. A number of imported films featuring cats and dogs in leading roles (not counting well-known comic figures like Garfield, Hello Kitty and Snoopy) began to make a splash in the mainland starting in 2016 with the live action US film Nine Lives grabbing 112 million yuan and The Secret Life of Pets raking in nearly 400 million yuan.In March 2017, US comedy A Dog's Purpose took in a staggering 608 million yuan to become an unexpected box-office hit when it came to the mainland.As 2018 is the Year of Dog according to the Chinese calendar, more dog-related films are on their way to China including Megan Leavey, Netflix's Benji and Chinese mainland comedy Year of The Dogs - a significant increase compared to the past two decades when few pet movies were seen in cinemas. Also worth noting is that more and more domestic productions in the animal film genre are moving away from films where pets are a sideline plot to a human-centric story to films where the pet is the lead role. For instance, Year of The Dogs will star as many as 200 dogs of 30 breeds.