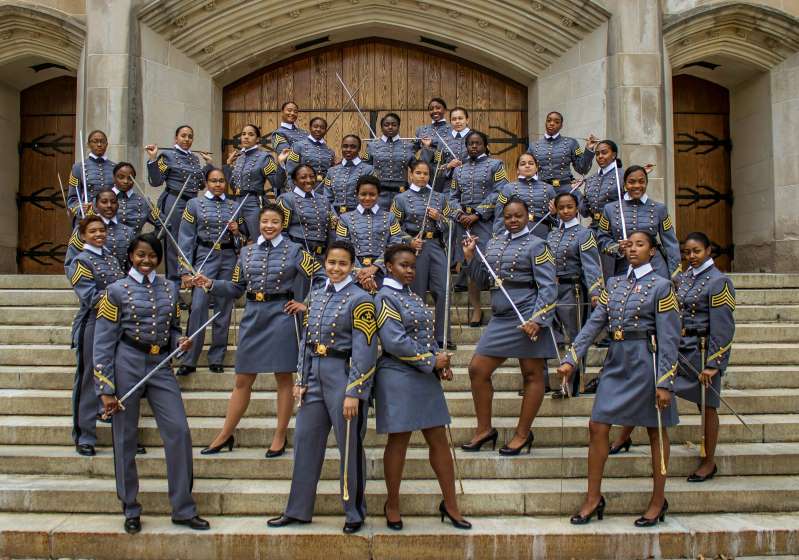 The class of cadets preparing to jubilantly toss their caps in the air at the US Military Academy's graduation ceremony Saturday includes 34 black women, a record number that's a sign of concerted efforts to diversify West Point's Long Gray Line.

West Point remains mostly white and mostly male. The 34 women comprise a thin slice of the roughly 1,000 cadets in the Class of 2019. Sometimes, they're the only women of color in a classroom. Still, cadets said they're proud to be part of a milestone at the historic academy after four years of testing their limits.

"I just showed myself and those who thought I couldn't do it initially that yes, I can," said senior cadet Stephanie Riley, of Jacksonville, Florida. "And not just, 'yes, I can.' I can show other little girls that yes, you can come to West Point. Yes, you can do something that maybe the rest of your peers aren't actually doing. And yes, you can be different from the rest of the group."

Riley was among the black female cadets who recently posed for pre-graduation photos in their gray uniforms, holding out ceremonial sabers. The pictures — part of a tradition for graduating cadets — were posted widely online and became a symbol of West Point's increasing diversity.

"I was more excited to just take the picture because it means that we're all graduating and it was great to be there with a lot of my sisters who have been there for me in very tough times during summer training and during the academic year," said senior cadet Gabrielle Young, from Hopkins, South Carolina. "I didn't expect it to have the impact that it did around the country."

While West Point challenges every cadet, experiences can be different for black females.

Riley said people would look to her for comment during classroom discussions about race or slavery. Young said she's acutely aware of how she carries herself and how she's perceived by different people.

"I feel like in some ways that I do have to prove myself a little bit more, prove that I belong here. And even a classmate told me, I think our freshman year, that I only got in because I was a black female," said Young, one of the few in her class chosen for medical school.

West Point boosted efforts to recruit women and blacks after being told to diversify in 2013 by then-Army Chief of Staff Gen. Raymond Odierno. The academy changed its marketing approach and opened a diversity office. Admissions officials increased outreach to metropolitan areas like New York City, Atlanta and Detroit. Not all of these efforts were aimed specifically at minorities or women, but they broadened the search for qualified candidates.

"We're beginning to see the fruits of our labors," director of admissions Col. Deborah McDonald said.

In another milestone, Lt. Gen. Darryl A. Williams became the first black superintendent at West Point last summer. In 2017, Simone Askew was the first black woman to become first captain of the Corps of Cadets, the highest student position at academy.

Even with the progress in diversity, West Point has not been immune to issues faced by the military and society. Sexual assault and harassment have been such a persistent problem that Williams suspended classes for a day in February so the entire academy could focus intently on them. And it was only four years ago that 16 black female seniors inadvertently stirred up controversy by raising clenched fists in one of their own pre-graduation pictures.

Critics saw political overtones in a gesture that supporters said was made in good-natured solidarity.

On Saturday, Young and Riley will be among the graduates commissioned second lieutenants in the US Army after an address by Vice President Mike Pence. Riley will go into the Signal Corps. Young will study to become a doctor.

"I don't think I would trade this experience for anything in the world," Young said. "I know that I've accomplished a lot and I know that I'm prepared for whatever."